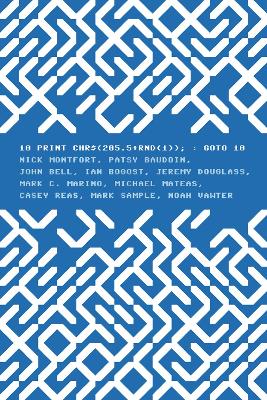 A single line of code offers a way to understand the cultural context of computing.This book takes a single line of code-the extremely concise BASIC program for the Commodore 64 inscribed in the title-and uses it as a lens through which to consider the phenomenon of creative computing and the way computer programs exist in culture. The authors of this collaboratively written book treat code not as merely functional but as a text-in the case of 10 PRINT, a text that appeared in many different printed sources-that yields a story about its making, its purpose, its assumptions, and more. They consider randomness and regularity in computing and art, the maze in culture, the popular BASIC programming language, and the highly influential Commodore 64 computer.

» Have you read this book? We'd like to know what you think about it - write a review about 10 PRINT CHR$(205.5+RND(1)); : GOTO 10 book by Nick Montfort and you'll earn 50c in Boomerang Bucks loyalty dollars (you must be a Boomerang Books Account Holder - it's free to sign up and there are great benefits!)

A Preview for this title is currently not available.
More Books By Nick Montfort
View All

Exploratory Programming for the Arts and Humanities, second edition
$82.92 $92.13