100 Things They Don't Want You To Know

Who was the Mothman? What caused the death of the Bordens? Did Lee Harvey Oswald assassinate JFK? And what was the true meaning of the 'WOW' signal? Daniel Smith, author of 100 Places You Will Never Visit, sets out to uncover the truth behind 100 unexplained events that have been shrouded in secrecy for generations. Under his investigative searchlight are mysterious landmarks, disappearances at sea, legendary myths, astonishing coincidences, UFOs, missing people and bizarre natural phenomena. Ranging from suspicious deaths (The Black Dahlia) to notorious murderers (Jack the Ripper) and from ancient artefacts (Tarim Mummies) to Cold War cover-ups (Lost Cosmonauts), via documents that remain untranslatable (Voynich Manuscript), debated icons of religion (Shroud of Turin) and puzzling paranormal appearances (Marfa Lights), Daniel Smith leaves no stone unturned in his quest to expose the bare facts and unravel the tales that have gripped curious minds for years. Also includes: Spontaneous Combustion, Whereabouts of Nazi Gold, Red Rain, Lost Literature of the Mayan Civilisation, Disappearance of Jean Spangler, Severed Feet of British Columbia, Shakespeare's Dark Lady, The Shugborough Inscription, Stonehenge, The Flying Dutchman, Lewis Carroll's Lost Diaries and the Beast of Bodmin Moor. 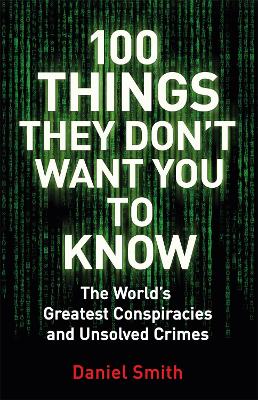 » Have you read this book? We'd like to know what you think about it - write a review about 100 Things They Don't Want You To Know book by Daniel Smith and you'll earn 50c in Boomerang Bucks loyalty dollars (you must be a Boomerang Books Account Holder - it's free to sign up and there are great benefits!)

Daniel Smith is the bestselling author of 100 Places You Will Never Visit, which has been translated into eight languages. He has written more than fifteen books, on subjects as diverse as Sherlock Holmes, cockney rhyming slang and the WWII Dig for Victory campaign, as well as further titles in this series. Daniel is also a long-time contributor to The Statesman's Yearbook, an annual geopolitical guide to the countries of the world. He lives in London.

A Preview for this title is currently not available.
More Books By Daniel Smith
View All

How to Think Like Sherlock: Improve Your Powers of Observation, Memory and Deduction
$16.99 $19.99

Instructions for the Proper Use and Application of the Remedies Prescribed for the Gout. by D. Smith, M.D.
$32.51 $36.12

A Letter to Dr. Cadogan, with Remarks on the Most Interesting Paragraphs in His Treatise on the Gout; In Which the Immediate Cause of a Fit of the Gout Is Proved, ... by Mr. Daniel Smith.
$39.12 $43.47

A Letter to Dr. Cadogan, with Remarks on the Most Interesting Paragraphs in His Treatise on the Gout: In Which the Immediate Cause of a Fit of the Gout Is Proved, ... by Mr. Daniel Smith. the Second Edition.
$39.12 $43.47

A Short Description of the State of Tennessee, Lately Called the Territory of the United States, South of the River Ohio: To Which Is Prefixed, the Constitution of That State.
$36.92 $41.02