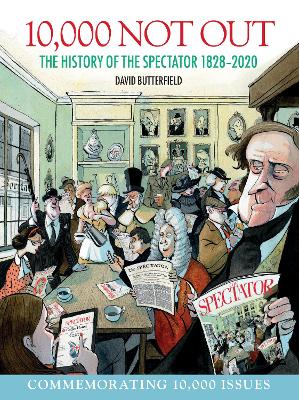 There is no journal with a livelier and richer history than The Spectator. As well as being the world's oldest current affairs magazine, none has been closer over the last two centuries to spheres of power and influence in Britain. First issued in 1828, during the dying days of the Georgian era, The Spectator came out ready to spar - with the Tories and their Prime Minister, the Duke of Wellington, with a corrupt political system, and with the lacklustre literary world of the day. Over the subsequent 52 Prime Ministers, The Spectator has not only watched the world change but waded into the fray: it has campaigned on consistently liberal lines, fighting for voters' rights, free trade, the free press and the decriminalisation of homosexuality, while offering open-minded criticism of every modern taboo and orthodoxy.

10,000 Not Out celebrates the 10,000th issue and recounts the turbulent and tortuous tale of 192 years chock-full of crises and campaigns, of literary flair and barbed wit. Eight chapters chart in technicolour the evolution of the title - from radical weekly newspaper, to moralising Victorian guardian, to wartime watchdog, to satirical magazine, to High-Tory counsellor, to the irreverent but influential The Spectator of the twenty-first century. The book weaves together copious quotations from the magazine's unparalleled archive, the contemporary press, private letters and staff anecdote.

Buy 10,000 Not Out: The History of The Spectator 1828 - 2020 by David Butterfield from Australia's Online Independent Bookstore, Boomerang Books.

» Have you read this book? We'd like to know what you think about it - write a review about 10,000 Not Out: The History of The Spectator 1828 - 2020 book by David Butterfield and you'll earn 50c in Boomerang Bucks loyalty dollars (you must be a Boomerang Books Account Holder - it's free to sign up and there are great benefits!)


A Preview for this title is currently not available.
More Books By David Butterfield
View All

The Early Textual History of Lucretius' De rerum natura
No Stock on Hand, Supplier Has No Due Date for Supply.
$41.36 $45.95