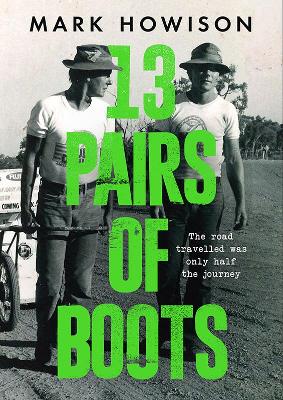 13 Pairs of Boots: The Road Travelled Was Only Half the Journey

Description - 13 Pairs of Boots: The Road Travelled Was Only Half the Journey by Mark Howison

In 1973 David Howison announced to his 17-year-old son Mark that they were going to walk around Australia to raise money to protect the kangaroos. Once he got over his initial shock, Mark was up for the adventure. Thanks to the local Kangaroo Protection Society they were kitted out in boots, hats and given a sponsorship with Fuji-Hanimax cameras. After leaving Sydney with a huge farewell from a Scottish Highlander band, thousands of people and many media interviews, it was just Mark, his dad, and their dog Wendy on the road. Anticipating a hero's welcome and free hospitality at every town, the pair soon discover that not only are they left to fend for themselves but that, in the bush, the bloody kangaroos don't need saving and angry farmers frequently reminded them of this fact by firing bullets over their heads. Dirt roads, wild-driving semi-trailers, feral pigs, crocodiles, snakes, rogue RSPCA officers and, eventually lack of food and, even more importantly to David, cigarettes, turned this inspiring quest into one of survival. To make matters worse, halfway through the trip, not only have the locals turned against them, Mark and David begin to become heartily sick of each other. And that is when the story really begins... Frequently hilarious and written by a master storyteller with a very 'Australian' turn of phrase, this is warm-hearted, entertaining tale of having big dreams and the determination to see them through, and the often fractured and bent, but always unbroken, love between father and son. AUTHOR: Mark was born the eldest of five children in Wentworth Falls, NSW. As a family they travelled around a lot, mainly to avoid debt collectors or to follow their father's latest gambit to make money. During his teens and early twenties Mark played rugby league and participated in boxing. After his journey with his father around Australia, Mark worked as a painter and decorator, and later in sales administration. Mark currently lives in Sydney.

Buy 13 Pairs of Boots: The Road Travelled Was Only Half the Journey by Mark Howison from Australia's Online Independent Bookstore, Boomerang Books.

Book Reviews - 13 Pairs of Boots: The Road Travelled Was Only Half the Journey by Mark Howison

» Have you read this book? We'd like to know what you think about it - write a review about 13 Pairs of Boots: The Road Travelled Was Only Half the Journey book by Mark Howison and you'll earn 50c in Boomerang Bucks loyalty dollars (you must be a Boomerang Books Account Holder - it's free to sign up and there are great benefits!)