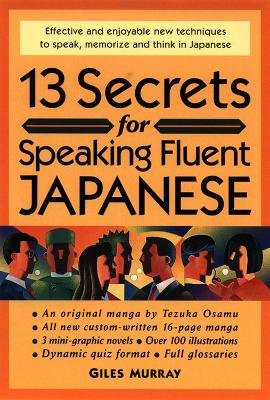 13 Secrets for Speaking Fluent Japanese presents tested shortcuts for Japanese language acquisition. Identifying two groups of people who actively and effectively study Japanese to the point of fluency-successful non-native learners and Japanese children-Giles Murray has collected from both groups the most rewarding and universal techniques which can be put to immediate use by both beginner and advanced students of Japanese.
This book is designed for people who have tried orthodox textbooks and failed, people who know a little Japanese but don't have the

» Have you read this book? We'd like to know what you think about it - write a review about 13 Secrets For Speaking Fluent Japanese book by Giles Murray and you'll earn 50c in Boomerang Bucks loyalty dollars (you must be a Boomerang Books Account Holder - it's free to sign up and there are great benefits!)

GILES MURRAY lives in Tokyo, where he works as a bilingual advertising copywriter, translator, editor, and publisher. He is the author of Instant Business Japanese and also appears as Jeremy Hilditch in the Japanese for Busy People: The Video series. His personal website is at www.speaking-japanese.com.

A Preview for this title is currently not available.
More Books By Giles Murray
View All