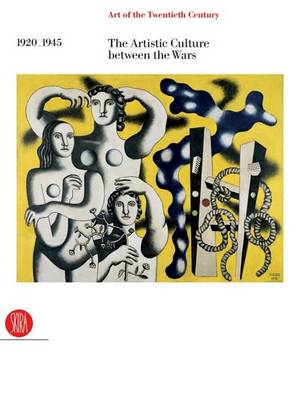 This series offers a complete, up-to-date survey of the phenomena of the 1900s and the first years of the new millennium through an original, transversal and interdisciplinary analysis of artistic culture in the twentieth century. The second volume analyses and presents the hugely diverse world of artistic production between the two world wars, taking into consideration not only the environment that took shape in the immediate wake of the First World War, from the so-called "return to order" to the re-emergence of a figurative approach (The New Objectivity, Novecento Italiano, Magic Realism) that was profoundly anti-avant-garde yet imbued with strong plastic and semantic values, but also the evolution of an avant-garde that was now historicised, with its second-generation artists (Aerial Painting, the second generation of Futurism). Also considered are the codification of certain phenomena, such as Surrealism, changes in taste (from Art Deco to Novecentismo), as well as art as the expression of the totalitarian regimes, and the outbreak of the Second World War, with the embracing of environments outside Europe, particularly the USA. The chronological boundaries are marked by the birth of the Dadaist experience in Germany and the establishment of Metaphysics in Italy (1917- 1920) on one side and by the birth of the great season of U.S. Abstract Expressionism (1943-1945) on the other.

» Have you read this book? We'd like to know what you think about it - write a review about 1920-1945 The Artistic Culture between the Wars book by Valerio Terraroli and you'll earn 50c in Boomerang Bucks loyalty dollars (you must be a Boomerang Books Account Holder - it's free to sign up and there are great benefits!)

A Preview for this title is currently not available.
More Books By Valerio Terraroli
View All