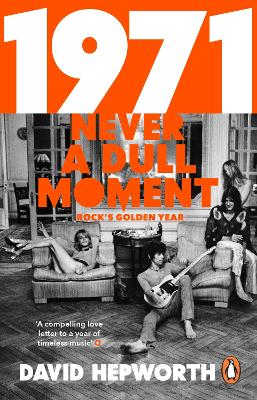 The Sixties ended a year late - on New Year's Eve 1970, when Paul McCartney initiated proceedings to wind up The Beatles. Music would never be the same again.
The next day would see the dawning of a new era. 1971 saw the release of more monumental albums than any year before or since and the establishment of a pantheon of stars to dominate the next forty years - Led Zeppelin, David Bowie, the Rolling Stones, Pink Floyd, Marvin Gaye, Carole King, Joni Mitchell, Rod Stewart, the solo Beatles and more.
January that year fired the gun on an unrepeatable surge of creativity, technological innovation, blissful ignorance, naked ambition and outrageous good fortune. By December rock had exploded into the mainstream.
How did it happen? This book tells you how. It's the story of 1971, rock's golden year.

Other Editions - 1971 - Never a Dull Moment by David Hepworth » Have you read this book? We'd like to know what you think about it - write a review about 1971 - Never a Dull Moment book by David Hepworth and you'll earn 50c in Boomerang Bucks loyalty dollars (you must be a Boomerang Books Account Holder - it's free to sign up and there are great benefits!)

David Hepworth has been writing about, broadcasting about and speaking about music since the 70s. He was involved in the launch and/or editing of magazines like Smash Hits, Q, Mojo and The Word among many others. He was one of the presenters of the BBC rock music programme Whistle Test and one of the anchors of the Corporation's coverage of Live Aid in 1985. He has won the Editor of the Year and Writer of the Year awards from the Professional Publishers Association and the Mark Boxer Award from the British Society of Magazine Editors. He is a director of the independent company Development Hell and divides his time between writing for a variety of magazines and newspapers, speaking at events, broadcasting work and blogging. He lives in London. 'I was born in 1950,' he says, 'which means that in terms of music I have the winning ticket in the lottery of life'.

A Preview for this title is currently not available.
More Books By David Hepworth
View All

Nothing is Real: The Beatles Were Underrated And Other Sweeping Statements About Pop
Available, ships in 7-10 business days
$19.54 $22.99

Overpaid, Oversexed and Over There: How a Few Skinny Brits with Bad Teeth Rocked America
No Stock on Hand, Supplier Has No Due Date for Supply.
$38.69 $42.99