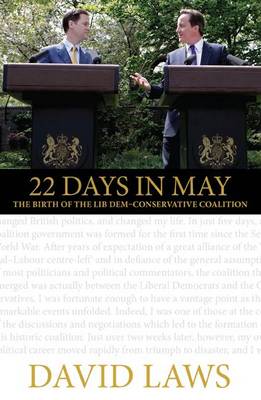 The Birth of the Lib Dem-Conservative Coalition

Description - 22 Days in May by David Laws

David Laws was one of the key Lib Dem MPs who negotiated the coalition deal, and the book includes his in-depth, behind the scenes, account of the talks with the Conservative and Labour teams after the General Election, as well as the debates within his own party about how the Lib Dems should respond to the challenges and threats of a hung parliament. The Liberal Democrats' and Conservatives' decision to form a Coalition government has changed the face of British politics. This book sets out the inside story of how this momentous event unfolded, and how - together - the Liberal Democrats and Conservatives have started to address the challenge of a massive government budget deficit.

Book Reviews - 22 Days in May by David Laws

» Have you read this book? We'd like to know what you think about it - write a review about 22 Days in May book by David Laws and you'll earn 50c in Boomerang Bucks loyalty dollars (you must be a Boomerang Books Account Holder - it's free to sign up and there are great benefits!)

David Laws is the Lib Dem MP for Yeovil. He was briefly Chief Secretary to the Treasury in David Cameron's coalition government. He was co-editor of the influential The Orange Book (2004) and Britain after Blair (2006).

A Preview for this title is currently not available.
More Books By David Laws
View All