24 Hours at the Somme

Description - 24 Hours at the Somme by Robert Kershaw

The first day of the Somme has had more of a widespread emotional impact on the psyche of the British public than any other battle in history. Now, 100 years later, Robert Kershaw attempts to understand the carnage, using the voices of the British and German soldiers who lived through that awful day.
In the early hours of 1 July 1916, the British General staff placed its faith in patriotism and guts, believing that one 'Big Push' would bring on the end of the Great War. By sunset, there were 57,470 men - more than half the size of the present-day British Army - who lay dead, missing or wounded. On that day hope died.
Juxtaposing the British trench view against that from the German parapet, Kershaw draws on eyewitness accounts, memories and letters to expose the true horror of that day. Amongst the mud, gore and stench of death, there are also stories of humanity and resilience, of all-embracing comradeship and gritty patriotic British spirit. However it was this very emotion which ultimately caused thousands of young men to sacrifice themselves on the Somme.

Other Editions - 24 Hours at the Somme by Robert Kershaw 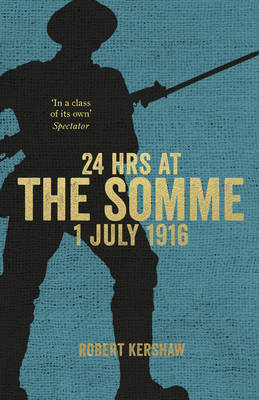 Book Reviews - 24 Hours at the Somme by Robert Kershaw

» Have you read this book? We'd like to know what you think about it - write a review about 24 Hours at the Somme book by Robert Kershaw and you'll earn 50c in Boomerang Bucks loyalty dollars (you must be a Boomerang Books Account Holder - it's free to sign up and there are great benefits!)

Robert Kershaw is a former Para, having joined the Parachute Regiment in 1973, commanded 10 Para and left as a full Colonel in 2006. His active service includes tours in Northern Ireland, the first Gulf War (during which he was awarded the US Bronze Star) and Bosnia. He is now a professional writer and has written ten highly praised books of military history. He has been interviewed on numerous TV documentaries and has published articles in the Times, Sunday Times, Telegraph, Mail and Express. He recently edited Paradata, an online encyclopaedia covering the living history of British Airborne Forces, which won the Outstanding Achievement Award in the Military category of the 2008 Interactive Media Awards. Kershaw has led site-specific battlefield touring groups across the world, including at Waterloo. He has also given lectures at the National Army, Airborne and Tank Museums and aboard the Queen Elizabeth cruise liner. Full details are available on the author's website at www.robertjkershaw.com.

A Preview for this title is currently not available.
More Books By Robert Kershaw
View All