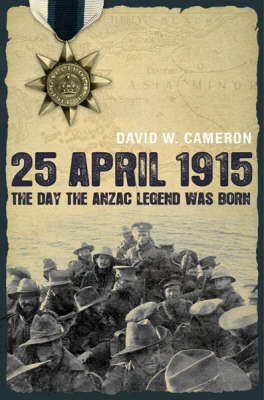 The Day the ANZAC Legend Was Born

On the 25th of April 1915 Australian troops landed on the Gallipoli Peninsula in what is now called Anzac Cove. They rushed from the beach up to Plugge's Plateau into Australian military history suffering many casualties on the way. Just after midday troops from New Zealand landed at Gallipoli and together the Australians and New Zealanders created the Anzac legend. It was the events of this first day that set the course of the whole battle leading to the evacuation of the Anzac troops in December 1915.

This is the story of that day telling the Australian, New Zealand and Turkish side of what was to become a tragedy for all three countries and an ultimate triumph for Turkey. It concludes with the visit of Charles Bean, the official Australian war correspondent, to the peninsula in 1919 as part of the Australian Historical mission to organise the burial of the dead that had lain exposed to the elements for the last four years, and to the formation of the cemeteries that are today visited by thousands.

» Have you read this book? We'd like to know what you think about it - write a review about 25 April 1915 book by David W Cameron and you'll earn 50c in Boomerang Bucks loyalty dollars (you must be a Boomerang Books Account Holder - it's free to sign up and there are great benefits!)

Dr David Cameron is a biological anthropologist who has written several books. In early 2003 he conducted a preliminary survey of the Anzac Gallipoli battlefields and held numerous discussions with Turkish and Australian government officials about conservation issues relating to the Anzac area. He became interested in the actual landing and decided to write this book.

A Preview for this title is currently not available.
More Books By David W Cameron
View All