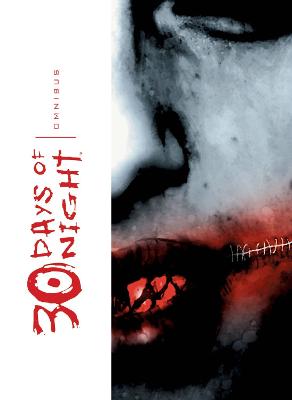 The vampire tale that put horror comics back on the map! Collects the original trilogy of stories centered around Barrow, Alaska, and its deadly visitors.

First, in the original 30 Days of Night, dive deep into the nightmare world of Barrow, Alaska, where month-long winter darkness calls a siren song to a band of bloodthirsty vampires. The town's only hope of survival lies in the hands of Stella and Eben, the local husband-and-wife sheriff team.

Then, in Dark Days, Stella and Eben have sacrificed so much, and the world desperately needs to know the truth about the vampire plague, but it's going to take a whole lot more than a pound of flesh to satisfy a bunch of ravening bloodsuckers who don't want their secrets revealed.

Last, we Return to Barrow, where the setting sun ignites a new winter of terror for the beleaguered townspeople. Brian Kitka is desperate to find out what happened to his brother last winter, and becoming the new sheriff may get him the answers he needs. But some things are best left in the dark, and Brian will need more than just help from a few old friends if anyone's going to be alive come sunrise.

30 Days of Night turned writer Steve Niles (The October Faction, Batman- Gotham After Midnight) and artist Ben Templesmith (Wormwood- Gentleman Corpse, Gotham by Midnight) into two of comics' premier creators. Now you can read their original trilogy in one volume.

Collects30 Days of Night, Dark Days, and Return to Barrow.

» Have you read this book? We'd like to know what you think about it - write a review about 30 Days Of Night Omnibus, Vol. 1 book by Steve Niles and you'll earn 50c in Boomerang Bucks loyalty dollars (you must be a Boomerang Books Account Holder - it's free to sign up and there are great benefits!)

Steve Nilesais a comic book author and novelist, known for works such as 30 Days of Night, Criminal Macabre, Simon Dark, Mystery Society and Batman- Gotham County Line.aHe is credited among other contemporary writers as bringing horror comics back to prominence. Ben Templesmithais aaNew York Timesabest selling artist and writer most widely known for his work in the comic book industry where he has received multiple nominations for the International Horror Guild Awards as well as the industry's top prize, the Eisner Award. He also won a Spike TV Scream Award. As a creator, his most notable works have beena30 Days of Nighta(which spawned a major motion picture) andaFell. His other projects include the critically acclaimed serialaWormwood- Gentleman Corpse, as well asaWelcome to Hoxford, andaSingularity 7, all of which he also wrote.

A Preview for this title is currently not available.
More Books By Steve Niles
View All