Bob Lee Swagger has seen enough of war and fighting for any man- his past as a Marine Corps sniper and later as a self-appointed avenger has been a bloody one. But the hope that he is finished with combat are dashed with a visit from Colonel Philip Yano.Yano has come to America to find a samurai sword that Bob's father took from Yano's dying father in the desperate battle for Iwo Jima in 1945. Yano believes the sword to be a national treasure, of huge political significance to whoever can get hold of it.Bob agrees to help and delivers the sword to Yano in Tokyo, but soon afterwards the Yano family are murdered, their house burned to the ground and the sword stolen. Dark forces are at work. With the aid of Yano's old comrades , Bob enters not only Tokyo's criminal underbelly, but also the violent, obsessive world of the Samurai. Once more he is on a mission of vengeance.

Other Editions - The 47th Samurai by Stephen Hunter 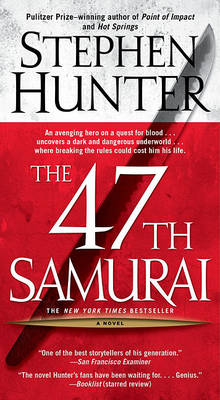 » Have you read this book? We'd like to know what you think about it - write a review about 47th Samurai book by Stephen Hunter and you'll earn 50c in Boomerang Bucks loyalty dollars (you must be a Boomerang Books Account Holder - it's free to sign up and there are great benefits!)

Stephen Hunter is the author of thirteen novels, one of which, Point of Impact, was adapted into the recent movie, Shooter. Chief film critic at The Washington Post, where he won the 2003 Pulitzer Prize, he has also published two collections of film criticisim and a nonfiction work. He lives in Baltimore, Maryland.

A Preview for this title is currently not available.
More Books By Stephen Hunter
View All