At the Altar of the Road Gods

Stories of motorcycles and other drugs

Description - At the Altar of the Road Gods by Boris Mihailovic

His mother may not know it but Boris Mihailovic has lived a fast, furious, often politicially incorrect life chasing the epiphanies of speed (the sensation not the drug). For Boris, motorbike riding was the rite of passage into manhood he'd been searching for. Now, nearly 40 years since he first rode a bike, the wisdom of age has provided the perspective for Boris to look back and realise some pretty wild shit went down.At the Altar of the Road Gods is about popping your motorcycle-buying cherry with an XJ650 Yamaha. It's about fines, feuds and fractures, high-sides, tank-slappers, angry police, even angrier young men, crashing, getting up, cranky girlfriends, riding faster, outlaws, and partaking in copious amounts of alcohol and drugs. It is about mateship and motorcycles. Ultimately, is is about four decades of two-wheel-related mayhem. Just don't tell Boris's mum! Be warned: may cause laughter, sleeplessness and the desire to buy a Lucifer-black Katana.

Buy At the Altar of the Road Gods by Boris Mihailovic from Australia's Online Independent Bookstore, Boomerang Books. 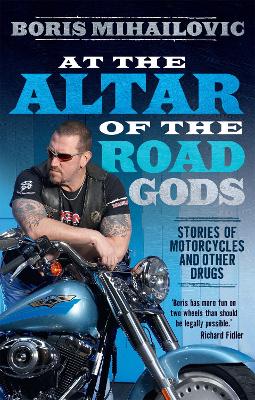 » Have you read this book? We'd like to know what you think about it - write a review about At the Altar of the Road Gods book by Boris Mihailovic and you'll earn 50c in Boomerang Bucks loyalty dollars (you must be a Boomerang Books Account Holder - it's free to sign up and there are great benefits!)

Boris Mihailovic has been a journalist and editor for almost 25 years. He's worked for such magazines as PEOPLE and PICTURE, edited OZBIKE, MOTORCYCLE LEGENDS and STREET MACHINE CHOPPERS, and was the launch editor of PICTURE PREMIUM and PREMIUM BABES. Over the years he's contributed to magazines like AUSTRALIAN DIRT BIKE, RALPH, FHM, AUSTRALIAN WORKER, TOP GEAR and UFC. He has a regular column with AUSTRALIAN MOTORCYCLE NEWS (AMCN), as well as testing bikes and writing features for the magazine. He also owns, manages and hosts www.bikeme.tv which has half a million page views per month.