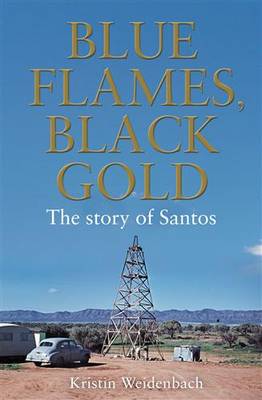 The Story of Santos

Blue Flames, Black Gold is a story of persistence. It's the intrepid wildcatters who ventured into Australia's dead heart and took a punt on drilling an oil well in virgin territory. It's the young Adelaide lawyer who dared to dream, and those on the sidelines who watched and scoffed. It's two school chums who started an exploration company amidst the oil fervour of 1954-a company that, 60 years later, would be the biggest company in South Australia.

The history of Santos covers the excitement of exploration and discovery in the 1950s and '60s, the boardroom tussles and political wrangles of the 1970s and '80s, and the rise of technological developments in the new millennium. It tells the tale of an industrial township that forms in the remote Australian outback; of Alan Bond's controversial stock market deal which led to the South Australian government capping shareholdings for 28 years; the construction of the 1,100-km Moomba-to-Sydney pipeline bringing natural gas to Sydney for the first time; and the birth of the Coal Seam Gas industry.

Blue Flames, Black Gold is not just the story of South Australia's biggest company but a story that encompasses the social and political history of the state and Australia's transition to the new energy sources of the future. It is the story of pioneers exploring new frontiers. It is a story of faith and vision and perseverance.

» Have you read this book? We'd like to know what you think about it - write a review about Blue Flames, Black Gold book by Kristin Weidenbach and you'll earn 50c in Boomerang Bucks loyalty dollars (you must be a Boomerang Books Account Holder - it's free to sign up and there are great benefits!)


A Preview for this title is currently not available.
More Books By Kristin Weidenbach
View All