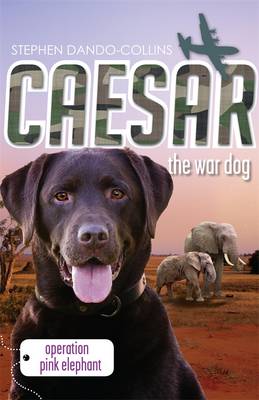 When their friend Lucky is kidnapped by elephant poachers in Tanzania, the Global Rapid Reaction Responders team is called in to find him. Caesar the super-sniffing war dog is sent with Ben and Charlie on the mission.

After a death-defying parachute jump into the ocean, they start gathering clues. The poachers were last seen stealing village children to become soldiers for their army - and they have forced Lucky to write a ransom letter. If the team can trace the letter, and work out which way the rebels went, they might be on the right track.

Saving Lucky from the heavily armed poachers is their top priority, but the GRRR team is prepared to do whatever they can to stop the cruel trade in elephant tusks and to free boy soldiers. Can Caesar's nose locate the illegal cargo - and trace and rescue a good friend - before it's too late? A battle on the African plain is about to erupt.

» Have you read this book? We'd like to know what you think about it - write a review about Caesar the War Dog 3 book by Stephen Dando-Collins and you'll earn 50c in Boomerang Bucks loyalty dollars (you must be a Boomerang Books Account Holder - it's free to sign up and there are great benefits!)