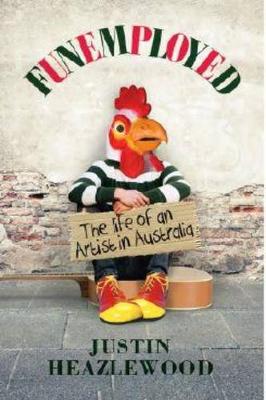 Funemployed goes beyond the hype and press releases to show what it's really like for anyone trying to be an artist in Australia. Hilariously honest, Justin Heazlewood covers it all - from starting out to giving up, running a business to burning out, the trappings of fame to the benefits of failure. As well as tapping into his ten years as the Bedroom Philosopher, Justin Heazlewood gleans wisdom and insight from interviewswith more than 100 fellow artists including Gotye (Wally De Backer), Clare Bowditch, John Safran, Tony Martin, Amanda Palmer,Christos Tsiolkas, Tim Rogers, Adam Elliot and Benjamin Law. Part confessional and part rogue self-help book, Funemployed is a landmark title for anyone interested in the making and enjoying of art in Australia.

» Have you read this book? We'd like to know what you think about it - write a review about Funemployed book by Justin Heazlewood and you'll earn 50c in Boomerang Bucks loyalty dollars (you must be a Boomerang Books Account Holder - it's free to sign up and there are great benefits!)

Justin Heazlewood is an award-winning writer, musician and comic. As the Bedroom Philosopher he has released three albums including the ARIA-nominated Songs from the 86 Tram, including the Triple J hit 'Northcote (So Hungover)', the video for which scored nearly a million hits on YouTube. He was a senior writer for frankie for five years. Not quite famous, Justin is a share-household name. Funemployed is his first book (that he didn't publish himself).