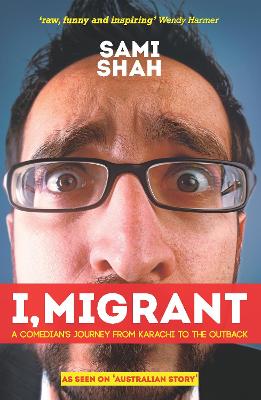 A Comedian's Journey From Karachi to the Outback Main

Description - I, Migrant by Sami Shah

Despite nearly being killed by a kangaroo and almost lynched and run out of town after his comedy was taken far too seriously, Sami Shah is very happy to be living in Australia. He has fronted his own satirical show on TV in Karachi, worked as a journalist and been a highly regarded newspaper columnist - all dangerous occupations to be involved in - when the combination of seeing the aftermaths of a devastating bomb attack and being the target of death threats convinced him to leave Pakistan. Under the terms of their Australian migration visa, Sami and his wife and young daughter were obliged to settle in a rural area, and so they moved to Northam in Western Australia.

Now Sami is battling a crippling addiction to meat pies, but at least is no longer constantly mistaken for an escaped asylum seeker from the nearby detention centre. He has also been the star of Australian Story, the subject of an article in The New York Times, and has performed countless comedy shows to ever-growing and appreciative audiences.

I, Migrant tells the hilarious and moving story of what it's like to leave the home you love to start a new life in another country so your child can be safe and grow up with a limitless future. Australia is lucky to have Sami Shah. Read I, Migrant, and laugh till you cry.

» Have you read this book? We'd like to know what you think about it - write a review about I, Migrant book by Sami Shah and you'll earn 50c in Boomerang Bucks loyalty dollars (you must be a Boomerang Books Account Holder - it's free to sign up and there are great benefits!)

Pakistani stand up comedian, Sami Shah has been delivering punchlines from the front lines of the War on Terror for several years. He has been profiled on Comedy Central, NPR's The World, Laughspin Magazine and performed on the BBC Asian Network and for TEDx. Sami is also an illustrator, graphic designer, columnist, husband, father and exhausted. Sami Shah is currently living in Western Australia (don't ask) and has been the subject of a high-rating episode of the award-winning documentary series Australian Story. He was voted Best Local Act at Perth International Comedy Fest 2013 for the show Sami Shah: I, Migrant.