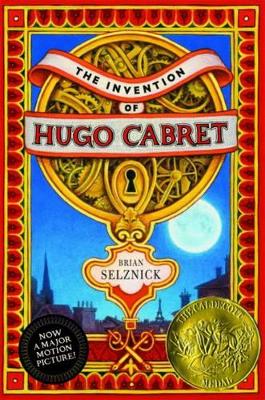 No other description available.

Other Editions - Invention of Hugo Cabret by Brian Selznick The Invention of Hugo Cabret

» Have you read this book? We'd like to know what you think about it - write a review about Invention of Hugo Cabret book by Brian Selznick and you'll earn 50c in Boomerang Bucks loyalty dollars (you must be a Boomerang Books Account Holder - it's free to sign up and there are great benefits!)

This is a book of wonder and imagination and upon opening it you will be blown away- Brian Selznick is one of those amazing artists that have the ability to be both wonderful in writing and inspiring in drawing- Hugo Cabret is told partly in Mr. Selznick's own drawings and partly in his superb writing; it is a life changing story that fills readers with Hope. Trust. Longing. Laughter. Sadness. And giddy Happiness. It is a favourite book for me and, for many a reader, won't be replaced with any other books. Unlike anything else- totally origonal and wholly life changing. You won't be the same, think the same, once you read this.

This is one of the few times where I read the book after having seen the film. The film is actually a pretty good adaption, with a few deviations from the book, the main messages are the same.

I was pretty excited to be able to get my hands on the book from the local library, fairly close to the release of the film and even more excited to have a flick through it.

Despite it's appearance (a weighty tome of some five hundred odd pages), it is in fact a picture book. The pictures are absolutely delightful too and tell the story with the style being a juxtaposition of a series of pictures and then prose - this book would not work on audiobook or probably as a braille book for that matter.

The million dollar question is this: Did I think the film or the book won? Actually I liked them both but for different reasons. Both were very powerful and beautiful.