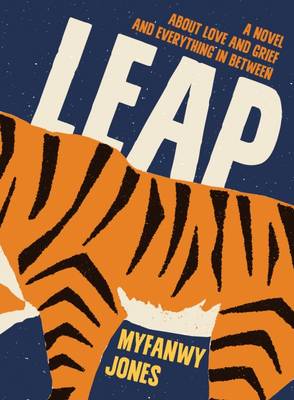 'Engaging and luminous' -Rosalie Ham, author of The Dressmaker

'. engrossing and compassionate' -Paddy O'Reilly, author of The Wonders

'. tender and surprising' -Kalinda Ashton, author of The Danger Game

Joe lives-despite himself. Driven by the need to atone for the neglect of a single tragic summer's night, he works at nothing jobs and, in his spare time, trains his body and mind to conquer the hostile environment that took his love and smashed up his future. So when a breathless girl turns up on the doorstep, why does he let her in? Isn't he done with love and hope?

On the other side of the city, graphic designer Elise is watching her marriage bleed out. She retreats to the only place that holds any meaning for her-the tiger enclosure at the zoo-where, for reasons she barely understands, she starts to sketch the beautiful killers.

Leap is a beautiful urban fairytale about human and animal nature, and the transformative power of grief. While at its heart is a searing absence, this haunting and addictive novel is propelled by an exhilarating life force, and the eternally hopeful promise of redemptive love.

'. a writer who knows how to draw us in by portraying what it is to love and lose in a real sense.' -Georgia Blain, author of The Secret Lives of Men

» Have you read this book? We'd like to know what you think about it - write a review about Leap book by Myfanwy Jones and you'll earn 50c in Boomerang Bucks loyalty dollars (you must be a Boomerang Books Account Holder - it's free to sign up and there are great benefits!)

“It had to end—the memorialising and group hugs. Because while their friends were devastated they were also glad it had not been them. In part, in those early days, they were rejoicing. They were only human. Jen’s absence called attention to the miracle of their own mortal breath misting the mirror”

Leap is the second fiction book by Australian author, Myfanwy Jones. Three years after the death of his girlfriend, Joe seems to be merely marking time: ambitions of teaching sports abandoned, he works in a bar and a café, lives behind a laundrette, spends his spare time perfecting parkour moves, mentoring a wilful teenager and avoiding all mention of his loss.

As they lie on the “man roof” watching the stars, Joe and his flatmates, Jack and Sanjay, examine their lives, loves and careers. Joe’s uncle Todd is determined to somehow draw him back into living; Lena, the chef at the bar wants to know him better; an attractive nurse turns up to rent the spare room; and just who is this Emily Dickinson, persistently chatting to him on Facebook about his Jen? His Jen who “…liked being at his house more than her own: the freedom of it, the lack of supervision. She could play at being an adult. At her house, he realised later--after--he got to be a child”.

Elise, in her late forties, is also trying to cope with grief: her marriage to Adam seems to be failing, her adult son is distant and her graphic design work has lost appeal. The high point of her life is a weekly visit to the tiger enclosure at the zoo, and she finds herself drawn, not just to observing these magnificent creatures, but to exhuming her paints from storage and capturing them on canvas. She muses: “Tiger mother: teeth that crush femurs like breadsticks carry mewling cubs without breaking skin; mace-like paws employed in gentle cavorting. That excoriating tongue applied lightly to baby fur. Perfect strength meets perfect love”

Jones gives the reader a very familiar setting: she conveys that Melbourne feel with consummate ease. Her characters are, for the most part, appealing, realistically flawed, often amusing and occasionally quirky. The banter between the flatmates is snappy, witty and funny. Her plot is original and wrapped in some beautiful prose. Her characters demonstrate the many different ways that people are affected by grief, and how they learn to cope. And Leap has a gorgeous, evocative cover. Some readers may be a bit disgruntled with the ending because it is somewhat indefinite, but it also holds great possibility and promise, and reveals a few clever twists that only the most astute readers will predict. This is a heart-warming novel: moving, funny and uplifting. A great read. With thanks to Good Reads First Reads for this copy to read and review.

Myfanwy Jones is the author of The Rainy Season, shortlisted for The Melbourne Prize for Literature's Best Writing Award 2009, and co-author of the bestselling Parlour Games for Modern Families, Book of the Year for Older Children ABIA 2010. She lives by a creek in Melbourne with her human and non-human family.