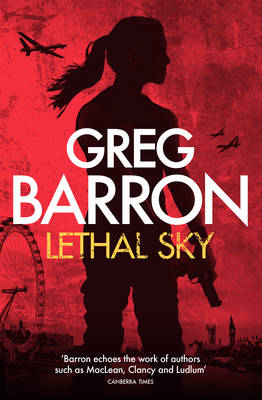 Action, explosions, adventure, terrorist plots and conspiracies combine for a compelling thriller in the vein of Clancy, MacLean and Ludlum.

A light aircraft flies over Sydney Harbour carrying the spores of a deadly microbe, enough to kill the people below and render the city uninhabitable for decades. Intelligence agent Marika Hartmann races to the scene aboard a taipan helicopter packed with Australian commandos, unable to shoot the plane down for fear of releasing the lethal cargo. Can she save her city?

In Western Europe and America millions of ordinary people start their day, unaware that a swarm of powerful new weapons, armed with the same biological agent, gather in the skies. In London PJ Johnson leads a team of Special Forces soldiers to find the terrorists' base of operations as biologist Jan Sloven works furiously to decode the conundrum left by a deranged scientific genius - but time is against them all.

Action and adventure, plots and conspiracies all combine for a breakneck thriller that feels terrifyingly real.

Greg Barron is a world traveller who has studied International Terrorism at the prestigious St Andrew's University. His critically acclaimed thrillers reflect his fascination with political, social and environmental change.

'A high-octane thriller ... the pace is excellent, the writing is sharp and Barron has a real talent for the evocation of place ... sufficiently gripping to keep you up at night' The Australian

'Barron echoes the work of authors such as MacLean, Clancy and Ludlum' Canberra Times

'Barron has written a thriller that entertains but also for those wanting more, a thought-provoking polemic' Courier-Mail

» Have you read this book? We'd like to know what you think about it - write a review about Lethal Sky book by Greg Barron and you'll earn 50c in Boomerang Bucks loyalty dollars (you must be a Boomerang Books Account Holder - it's free to sign up and there are great benefits!)