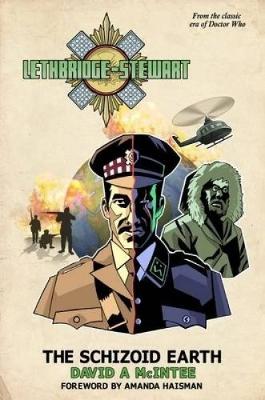 Description - Lethbridge-Stewart by David A. McIntee

Lethbridge-Stewart was supposed to be in the mountains of the east, but things didn't quite go according to plan. On the eve of war, something appeared in the sky; a presence that blotted out the moon. Now it has returned, and no battle plan can survive first contact with this enemy.Why do the ghosts of fallen soldiers still fight long-forgotten battles against living men? What is the secret of the rural English town of Deepdene? Lethbridge-Stewart has good reason to doubt his own sanity, but is he suffering illness or injury, or is something more sinister going on?Plagued by nightmares of being trapped in a past that never happened, Lethbridge-Stewart must unravel the mystery of a man ten years out of his time; a man who cannot possibly still exist.This is the second book in a brand-new series of novels set just after the Doctor Who serial The Web of Fear, featuring the characters and concepts created by Mervyn Haisman & Henry Lincoln.

» Have you read this book? We'd like to know what you think about it - write a review about Lethbridge-Stewart book by David A. McIntee and you'll earn 50c in Boomerang Bucks loyalty dollars (you must be a Boomerang Books Account Holder - it's free to sign up and there are great benefits!)

David A McIntee has written many spin-off novels based on the BBC science fiction television series Doctor Who, as well as novels based on Sherlock Holmes, Final Destination, Star Trek TNG, and Space: 1999. He has also written non-fiction about Star Trek: Voyager, and the Alien and Predator movie franchises, among others, and has written several books for military history publisher Osprey Publishing.David has also penned several audio plays, and also contributed to various magazines. A martial artist (he thought it said "marital arts" and signed up) when not writing, he is the epitome of the Romantic writer, in that he spends most of his time as an unremitting debtor who duels with swords.

A Preview for this title is currently not available.
More Books By David A. McIntee
View All