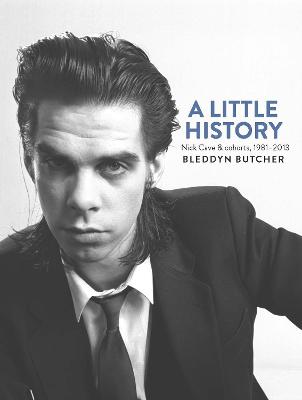 When Bleddyn Butcher first saw The Birthday Party play, back in 1981, he was astonished. And then enthralled. He set about trying to catch their lightning in his Nikon F2AS.

That quixotic impulse became a lifelong quest. A little history got made on the way.

Collected here for the first time are the fruits of his labour. A Little History is an extraordinary document, tracking Nick Cave's creative career from the apoplectic extravagance of The Birthday Party to the calmer disquiet of 2013's Push The Sky Away via snapshots, spotlit visions and sumptuous, theatrical portraits. It mixes the candid and uncanny, the spontaneous and the patiently staged, and includes eyeball encounters with Cave's baddest lieutenants, men for the most part who long since burned their own bridges down. Butcher's Nikonic eye defines moment after arresting moment in Cave's glorious, sprawling story: it's a splendid testament to two brilliant careers.

Other Editions - A Little History by Bleddyn Butcher » Have you read this book? We'd like to know what you think about it - write a review about Little History book by Bleddyn Butcher and you'll earn 50c in Boomerang Bucks loyalty dollars (you must be a Boomerang Books Account Holder - it's free to sign up and there are great benefits!)

Bleddyn Butcher was born in England and scathed in Western Australia. He worked for NME in the 1980s, photographing musicians (Alex Chilton, Joe Strummer, Michael Stipe, the Pogues and U2) and authors (William Gibson, J.G. Ballard and Greil Marcus). His photographs have since appeared in many leading music journals and are included in the permanent collection at Australia's National Portrait Gallery in Canberra. In 2011, he published Save What You Can: The Day of The Triffids, a biography of that band's prime mover David McComb. He lives in Sydney.

A Preview for this title is currently not available.
More Books By Bleddyn Butcher
View All