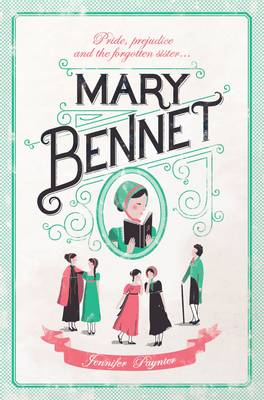 "I prayed for a brother every night. My two older sisters also prayed. They felt the want of a brother equally keenly, for our father's estate was entailed upon a male heir, and without a brother to provide for us or a rich husband to rescue us, we would all be destitute." Mary Bennet has been long overshadowed by the beauty and charm of her older sisters, Jane and Elizabeth, and by the forwardness and cheek of her younger sisters, Kitty and Lydia. From her post in the wings of the Bennet family, Mary now watches as Mr Bingley and Mr Darcy - and Mr Wickham - glide into her sisters' lives. While she can view these three gentlemen quite dispassionately (and, as it turns out, accurately), can she be equally clear-sighted when she finally falls in love herself? In this elegant retelling of Pride and Prejudice, Mary at last learns - with a little help from the man she loves - to question her family's values and overcome her own brand of 'pride and prejudice'.

» Have you read this book? We'd like to know what you think about it - write a review about Mary Bennet book by Jennifer Paynter and you'll earn 50c in Boomerang Bucks loyalty dollars (you must be a Boomerang Books Account Holder - it's free to sign up and there are great benefits!)

Mary Bennet is a novel with an interesting perspective on a popular classic. The story of Pride and Prejudice has been subject to many sequels, adaptions and reworkings, and in this novel, Jennifer Paynter casts Mary, the middle Bennet sister, as the narrator. Though Pride and Prejudice has never been my favourite of Austen's works (Emma, is) I quite enjoyed this story that parallels the events of the original tale but creates it's own path from Longbourn Estate to colonial Australia.

Mary Bennet is an unremarkable character in Pride and Prejudice, overshadowed by the beauty of Lizzie and Jane and the liveliness of Lydia and Kitty. Paynter has built upon the glimpses of her personality to develop a character with her own story to tell. It's unfortunate though that Mary is not a particularly likeable protagonist - she is pious, patronising and awkward. How much of her personality is informed by circumstance, and her own nature, is cause for debate however. As the middle girl, Mary is isolated from the close pairings of her older and younger sisters and the complexities of sibling relationships is a major theme of the novel. Mary also inexplicably bears the brunt of her father's disappointment in having no sons and without beauty to recommend her, she is beneath the notice of her mother whose sole concern is making advantageous matches for her daughters. So Mary retreats into herself, observing her family and their dramatics coolly, removing herself all together when she has the opportunity. Mary relates her own perspective of the relationships that form and dissolve around her between her sisters and their suitors including Mr Darcy, Mr Bingham and Mr Wickham. However she is much more concerned with her own interests, so while the events within Pride and Prejudice are regularly referenced, this story is more than a simple retelling. Mary's story extends beyond the scope of Austen's novel as Mary leaves Longbourne for some time to become a companion to her tutor's mother, and on her return Mary's friendship with Cassandra Long and her unusual relationship with Peter Bushell are her main preoccupations. We also follow Mary to Australia where her life patiently awaits her.

Jennifer Paynter imitates the tone of Austen remarkably well, the language is true to the period and Mary's voice feels familiar. I have to admit I found the novel slow going at times, much in the same way as I did Pride & Prejudice, but I did find it a pleasant story and I think Austen fans will find Mary Bennet a satisfying read.


A Preview for this title is currently not available.
More Books By Jennifer Paynter
View All