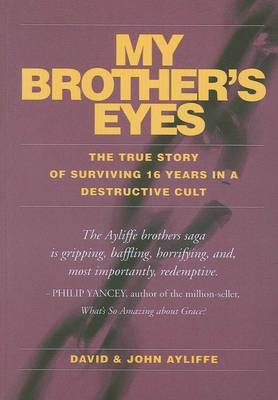 The True Story of Surviving 16 Years in a Destructive Cult

'My Brother's Eyes' tells the sad but true story of a dangerous religious cult that operated in NSW. David and John wrote the book together as they believe people need to know how secretive religious groups operate and the damage they cause to families.

In fact David was involved with the group from his late teenage years and didn't leave until his early 40s. Called 'Zion Full Salvation Ministry', the cult began as part of an inner city Anglican Church in Sydney NSW. It was founded by a woman who claimed to have Christ's stigmata and to be the embodiment of God on earth. When the woman died 16 years later, most of the 70 odd congregation had been stripped of their finances and investments and in many cases their self esteem too.

'My Brother's Eyes' is a troubling story but at least it has a happy ending as it tells the story of the separation of the brothers and then their eventual restoration.

"True insight into the psychology of a sect both from the inside and the out is very rare. This account by two brothers is illuminating, fascinating and intelligent." - Bryce Courtenay

"The Ayliffe saga is gripping, baffling, horrifying, and, most importantly, redemptive." - Phillip Yancey

» Have you read this book? We'd like to know what you think about it - write a review about My Brother's Eyes book by David Ayliffe and you'll earn 50c in Boomerang Bucks loyalty dollars (you must be a Boomerang Books Account Holder - it's free to sign up and there are great benefits!)