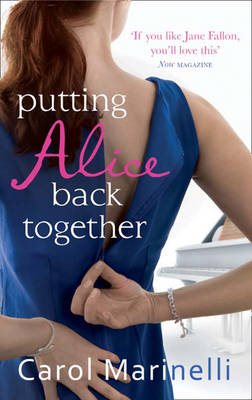 Putting Alice Back Together

Description - Putting Alice Back Together by Carol Marinelli

There's only so much sex, valium and red wine you can take to paper over the cracks...

Alice is the friend you wish you had. The girl who makes a party more fun, drinks wine out of a mug and makes you laugh while you're crying over an ex. Alice is totally happy, everything is amazing and there is nothing at all to worry about...except, well: Her job was really great - 10 years ago. She is in love with her best friend, but he's gay. Her credit card bills are under her bed unopened...
But maybe the biggest problem for Alice is that she has a secret. A secret so big she can't tell anyone. How do you keep a secret like that when everything is starting to fall apart? And once it's out there, how do you ever begin to put yourself back together again?
`If you like Jane Fallon, you'll love this book. Sharp, honest and funny.' - Now magazine

Book Reviews - Putting Alice Back Together by Carol Marinelli

» Have you read this book? We'd like to know what you think about it - write a review about Putting Alice Back Together book by Carol Marinelli and you'll earn 50c in Boomerang Bucks loyalty dollars (you must be a Boomerang Books Account Holder - it's free to sign up and there are great benefits!)

Book Review: Putting Alice Back Together by Carol Marinelli - Reviewed by Shelleyrae (21 Mar 2012)

Putting Alice Together Again is Carol Marinelli’s first contemporary women’s fiction title after publishing more than a dozen traditional romance titles with Harlequin. While there is a small thread of romance in this novel, Putting Alice Together Again is something very different altogether. Alice is certain that no one can guess at the secrets she hides, a bright smile and sleek hair style helps her pretend everything is okay, yet cracks are beginning to appear in Alice’s brittle veneer. Her buried memories of the past are pushing their way to the surface and Alice is plagued by anxiety attacks, self medicating with alcohol and Valium and sabotaging her career and relationships. With her life rapidly spiraling out of control, Alice is coming apart and she is not sure she will ever be able to pick up the pieces.

What first strikes you about Alice in the opening chapters of the novel is her repressed anger, shame and bitterness. Seething at the casual remarks of her friend and lover in reaction to a news item, bitter at being required to rescue Nicole’s birthday party, ashamed of a brief sexual encounter in the restaurant bathroom with a man she barely knows, she is warped by thinly veiled contempt aimed at both herself and everyone around her. Despite such a an inauspicious introduction, as Alice’s story unfolded I found her an intriguing character for not only her many flaws but also the glimmer of vulnerability and pain that Marinelli reveals by alternating between Alice’s past and her present. Alice is the central figure so its essential the reader finds some sort of rapport with her. It’s not always easy though, she tends to wallow in self pity and is quite self centered. I’m not sure I ever really liked her much but as the link between Alice’s painful history and her current issues becomes more apparent, Alice slowly earned my sympathy and understanding. Given that Alice is written in the first person, Marinelli finds a good balance between the internal dialogue of her character and the external interaction with other characters, to use a trite phrase, she shows rather than tells which provides a breather from Alice’s intensity. Alice’s secret, when it becomes clear is shocking, despite being foreshadowed, and I admired Marinelli’s skill in drawing out the tension to the reveal that coincides with Alice’s present day crisis. It is a dark novel, thick with emotion and drama, and can feel a little oppressive. Evan as Alice begins to put her self back together, any optimism is muted. in Putting Alice Back Together the author explores a number of themes such as post traumatic shock, grief, denial and addiction but perhaps the most uplifting is her examination of friendship. Alice and Ros are friends but each hold back part of them selves stunting their closeness, through the course of the novel they learn the value of trust by revealing their vulnerabilities. The author also explores the importance of this intimate connection in romantic relationships by introducing Hugh who is willing to call Alice out on the things she is trying to hide.

Putting Alice Back Together is not a light read, it is too full of fraught emotion and angst to dismiss easily. It is certainly capable of holding the readers interest though as an intriguing exploration of a very flawed and realistic character.

Carol Marinelli recently filled in a form asking for her job title. Thrilled to be able to put down her answer, she put writer. Then it asked what Carol did for relaxation and she put down the truth - writing. The third question asked for her hobbies. Well, not wanting to look obsessed she crossed the fingers on her hand and answered swimming but, given that the chlorine in the pool does terrible things to her highlights - I'm sure you can guess the real answer.

A Preview for this title is currently not available.
More Books By Carol Marinelli
View All