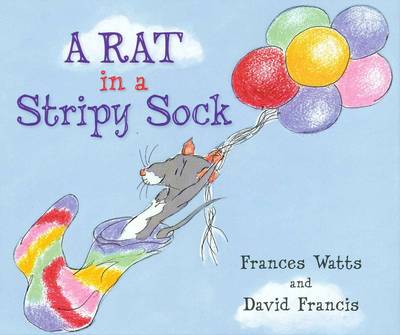 A Rat in a Stripy Sock

Description - A Rat in a Stripy Sock by Frances Watts

A rain-swept day ...A heart-lifting flash of colour! A story about the joy to be had in life's simplest pleasures - especially when they are shared - and finding happiness in the most unexpected places. A book for all ages.

Other Editions - A Rat in a Stripy Sock by Frances Watts Book Reviews - A Rat in a Stripy Sock by Frances Watts

» Have you read this book? We'd like to know what you think about it - write a review about Rat in a Stripy Sock book by Frances Watts and you'll earn 50c in Boomerang Bucks loyalty dollars (you must be a Boomerang Books Account Holder - it's free to sign up and there are great benefits!)

Frances Watts spent nearly ten years working with some of Australia's most talented children's authors and illustrators as an editor before writing a book of her own. Her bestselling picture book Kisses for Daddy (illustrated by David Legge), was named an Honour Book in the Early Childhood category of the 2006 Children's Book Council of Australia Book of the Year Awards, and has sold over 100,000 copies worldwide in many different languages. Her second picture book with David Legge, Parsley Rabbit's Book about Books, won the Eve Pownall Award for Information Books in the 2008 CBCA Book of the Year awards. Captain Crabclaw's Crew is the third book by this successful team. As well as continuing to write picture books, Frances has been working on a series of junior novels about two very unlikely superheroes, Extraordinary Ernie and Marvellous Maud, with the heroic illustrator Judy Watson. The third book in the series, The Greatest Sheep in History, will be published in April 2009. Frances lives in Sydney's inner west, and divides her time between writing and editing.