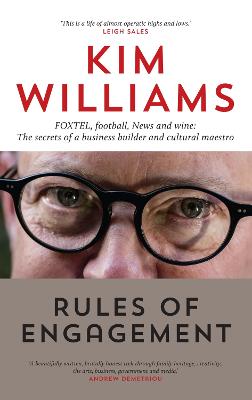 From FOXTEL to News Corp, film to football, opera to business, Kim Williams is a builder of Australian institutions.

From FOXTEL to News Corp, film to football, opera to business, Kim Williams is a builder of Australian institutions. He has worked with some of the very best in their fields-Rupert Murdoch, Kerry Packer, Kevin Sheedy, Gail Kelly and Don Burrows to name just a few.
Rules of Engagement is a candid, up close and very personal account of the exercise of power in the nation's leading boardrooms, political parties and media organisations.
Told with a deft touch and an energetic, at times mischievous spirit, Rules of Engagement shows how much one person can achieve if they have insatiable curiosity, limitless interests and impressive discipline.

Other Editions - Rules of Engagement by Kim Williams 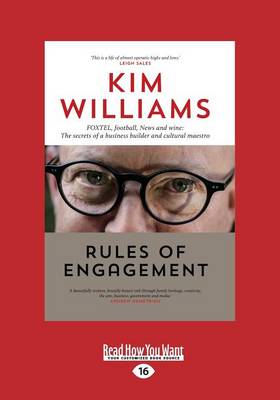 » Have you read this book? We'd like to know what you think about it - write a review about Rules of Engagement book by Kim Williams and you'll earn 50c in Boomerang Bucks loyalty dollars (you must be a Boomerang Books Account Holder - it's free to sign up and there are great benefits!)

Kim Williams has had a long involvement in the arts, entertainment and media industries here and overseas. He has held various Australian executive leadership positions since the late 1970s, including as chief executive at News Corp Australia, FOXTEL, Fox Studios Australia, the Australian Film Commission, Southern Star Entertainment and Musica Viva Australia, a senior executive at the ABC and a nine-year term as chairman of the Sydney Opera House Trust. He has been appointed as a Member in the Order of Australia for his services to the arts and public policy formulation in the film and television industries.

A Preview for this title is currently not available.
More Books By Kim Williams
View All