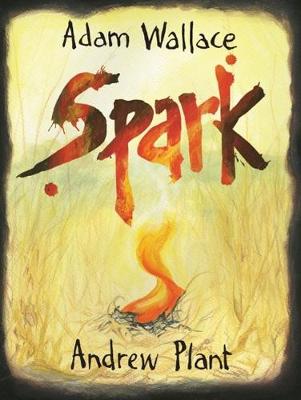 I began as a tiny spark in the dry grass. All I wanted was a friend. I found one in the wind, who helped me grow, who helped me fly! In the end, though, was the wind really my friend at all?

Other Editions - Spark by Adam Wallace » Have you read this book? We'd like to know what you think about it - write a review about Spark book by Adam Wallace and you'll earn 50c in Boomerang Bucks loyalty dollars (you must be a Boomerang Books Account Holder - it's free to sign up and there are great benefits!)

Spark by Adam Wallace and Andrew Plant Ford St, 2016 9781925272413, $24.95 hb Reviewed by Emily Meldrum Essentially Spark is a story about a bushfire told from the fire’s own perspective. Sounds simple… but it really is so much more. As many bushfires do, this one ignites from a simple cigarette butt thrown onto dry grass, it joins the wind and together they play. Fire is excited to have a new friend and delights in flying through the forest. It is only when the wind takes control and begins to bully its new friend that the fun stops. The fire appeals to the wind to stop but meanwhile they destroy homes and bushland. The potential for learning from this book is enormous. With limited text it is easy to see the power of verbs and adjectives, deconstruct first person writing and character values. For other learning the literal meaning of the text may lead to endless discussions upon topics of arson leading to Ash Wednesday, or why fire is not always a bad thing in the Australian bush. This story also lends itself to a deeper learning about friendships and the qualities that make successful or unsuccessful relationships – always a current issue in schools. The beauty of an outstanding picture book is the illustrations that take the story to a level beyond the text, richly enhancing it. That is exactly what happens here. Adam Wallace has excelled in his creation of this story beautifully supported with text and illustrations from Andrew Plant. I have read Spark repeatedly, each time marvelling at the finished product! The remorse the fire feels when reviewing its ‘play’ is tangible, it is right that it feels shame . . . but it did not work alone.

Spark is a novel that uses few words but conveys a very powerful message nonetheless. The book is a tribute to the Black Saturday Fires, though it is a very unique take on the horrific tragedy of it and one that will resonate deeply with an Australian audience of any age. It tells the story of an innocent spark of fire, lured into playing with the wind. As the spark grows into a ferocious fire aided by the wind, the detailed illustrations and use of vibrant reds and oranges create a dynamic and powerful landscape being torn through and destroyed.

The language used to convey the spark’s thoughts and perspective paints it as an innocent victim, ridden with guilt over the destruction left in its wake. The reality of the Black Saturday Fires are only quietly implied through the vague illustrations of silhouetted humans running from the fire, and the greyscale ashes left behind. There is an intricacy in the watercolour illustrations, underscored by both the precise colour palette choices and the sketchy pencil lines depicting bugs and leaves found in the bush being burned.

Despite the serious nature of the tragedy depicted, the use of simplistic language makes it accessible to children, and offers a perspective on otherwise random events that could be useful to children trying to make sense of the disaster. The book manages to convey a sincere and heartfelt story with equally impressive illustrations, and holds an uplifting ending about the bush regrowing anew, highlighted with the glimpse of vibrant green in the final illustration against the dark grey ashes left behind.

To convey such a sense of empathy and optimism when writing about such a horrific tragedy without minimizing the disaster caused takes real talent and skill, and Adam Wallace and Andrew Plant manage to do this flawlessly.