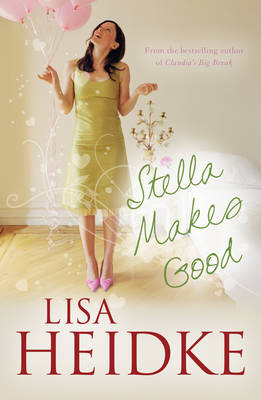 Stella Sparks is on good terms with her ex-husband, Terry, despite the fact he left her for another woman. Stella's philosophical - the marriage had run its course, they remain friends and the wellbeing of their kids is central to both of them.

Stella's two closest friends, Carly and Jesse, envy her togetherness and wish they could emulate it. Jesse's husband, Steve, is a control freak who's driving her crazy, but she has two small children and can't see a way out. Carly, meanwhile, suspects her husband is having an affair and isn't sure what to do about it.

Stella's life takes a distinctly upward turn when she meets a handsome, apparently single - no ring, anyway - father at her son's school speech night. For Carly and Jesse, however, the search for happiness and fulfilment proves more elusive.

With a healthy dose of humour and romance Stella Makes Good is about the games we play, the secrets we keep, the unpredictable nature of life and the importance of female friendship. 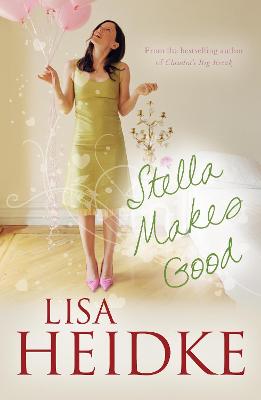 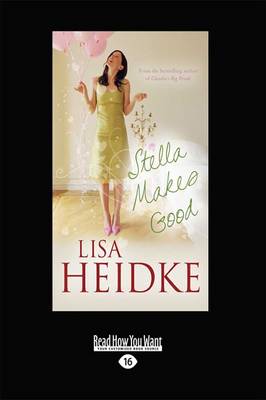 » Have you read this book? We'd like to know what you think about it - write a review about Stella Makes Good book by Lisa Heidke and you'll earn 50c in Boomerang Bucks loyalty dollars (you must be a Boomerang Books Account Holder - it's free to sign up and there are great benefits!)

In the northern suburbs of Sydney, three friends Stella, Carly and Jesse are having a quiet drink. Stella, amicably separated with two teenagers has her eye on handsome single dad, Doctor Mike, while (married) Carly has had too much to drink and is flirting outrageously with one of Mike's friends. When Jesse heads home early to relieve the babysitter of her twins because her husband calls to say he is working late, Stella reluctantly follows Carly to a party with Mike and his mates but the women are shocked to discover a swingers haven behind the door of an ordinary suburban house and Jesse's control freak husband, Steve crawling about on his hands and knees wearing a nappy and little else. Keeping Steve's secret has surprising and shocking consequences for the three women whose only desire is to 'make good'.

With heart and humour, Lisa Heidke examines the secrets lurking behind closed doors in suburban Sydney. Her three protagonists Stella, Carly and Jesse are married mothers at different stages in their lives. Though close friends, they have secrets and concerns they keep to themselves that are exposed as their lives take an unpredictable turn. These are characters and issues readers can relate to - the demands of balancing family and work, the breakdown of marriage, empty nest syndrome and a fear of starting over, which Heidke explores in an honest and insightful manner. Newly separated Stella is surprised to find she is content despite her husband leaving her for a younger woman. Her teenage children aren't terribly happy with the idea, neither is her ex husband's mother who comes to stay with Stella after a fall, but Stella is finding the confidence to move on with her life. Despite being in a period of transition Stella's life is the most stable of the three friends and anchors the story. As the title character, Stella's story is told using the first person point of view while Jesse and Carly's perspective is shared in the third person. Carly is drinking too much, a stay at home mother, her teenage boys rarely need her anymore, her husband isn't as attentive as she would like and she is worried he is having an affair. impulsive and anxious, particularly after a few too many drinks, Carly is struggling to redefine her life. I empathise with Carly's floundering, though my children are still young it was an adjustment to have them all at school finally and no longer being the central figure of their lives. (I didn't drink though - I started a book blog LOL) Jesse is a loving mother of nine year old twins but her unhappy marriage to bullying Steve is affecting her so badly that the symptoms of her OCD are worsening. Despite his poor behaviour, Jesse is afraid to leave him until his dirty secret is made public and Jesse makes a tragic mistake. I had a lot of sympathy for Jesse, there are many women who stay in bad marriages for the same reasons as she chooses to, and even though it is frustrating to witness her self denial at times Heidke ensures we understand her motive. We are also given insight into the story of Jesse and Steven's relationship from Jesse's sister, Louisa. Louisa fled Australia to the US shortly after their marriage, thinking she was protecting her sister but her decision proves to be based on a desire to protect herself and ultimately contributes to the harm her sister endures. Personally I didn't think Louisa was a necessary part of the story, nor that her perspective was required, but she does provide some contrast to the more conventional lives of Stella, Carly and Jesse.

Stella Makes Good is a well written story of friendship, family and finding your way. Examining domestic drama in a way which is both entertaining and thought provoking, I enjoyed reading Stella Makes Good and eagerly await Lisa Heidke's next novel.

Stella Makes Good is the 4th novel by Australian author, Lisa Heidke. Stella Sparks, librarian and mum of two teens, is amicably separated from her husband Terry, even though he left her for the voluptuous Amanda. They remain friends, both caring about their kids, and Stella even looks out for Terry’s mum, June. Stella’s closest friends, Jesse, another librarian, and Carly, a stay-at-home mum, wish they were as together as Stella seems to be. But Jesse’s husband, Steve, is a control freak who sends her anxiety sky high, while Carly suspects her husband, Brett, of infidelity. At a school speech night, Stella meets Mike, a handsome, apparently single dad: he seems interested and interesting, but Stella’s not sure she wants to get involved. When Stella and her friends meet for drinks one night, they somehow end up with Mike and his mates at a sex party. What they see there exposes a secret and sets in motion a chain of events that has tragic consequences. Heidke gives us an original plot that manages to touch on many topics: sexual games, drugs, empty nesters, Obsessive Compulsive Disorder and getting old. Cocaine, social media, a coma and a dominatrix are all part of the mix. The Sydney setting gives it a great local feel and the dialogue is very natural, just what you would hear at the neighbourhood pub, supermarket or café. The writing style is lovely, almost conversational and very easy to read. There are some great characters to love, hate, pity, admire and laugh at, and some worthwhile messages. Thought-provoking and funny, this is ultimately an uplifting tale about families, love, secrets, guilt, forgiveness, the unpredictability of life and the importance of friendship. I very much enjoyed this novel. It is the first of Lisa Heidke’s that I have read but it won’t be the last!

Lisa Heidke studied journalism at Queensland University, fled Brisbane and settled in Sydney where she landed a job as an acquisitions editor in book publishing. After a while she swapped book publishing for magazine publishing, working as a feature writer on several national magazines, including Practical Parenting and Bride to Be.After many years living in Sydney's inner west, Lisa woke up one morning to find herself married with three children and living on the North Shore-much to her surprise and sometimes horror.

A Preview for this title is currently not available.
More Books By Lisa Heidke
View All