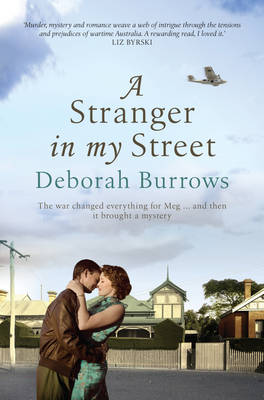 A Stranger in My Street

Description - A Stranger in My Street by Deborah Burrows

It's January 1943. Australia is at war and Perth is buzzing. US troops have permanently docked in the city in what local men refer to bitterly as the American occupation, and Perth women are having the time of their lives. The Americans have money, accents like movie stars, smart tailored uniforms and good manners. What's more, they love to dance and show a girl a good time, and young women are throwing caution to the wind and pushing social boundaries with their behaviour. Not Meg Eaton, however. The war has brought her nothing but heartbreak, stealing her young love eighteen months ago. Until, in the middle of a Perth heat-wave, she meets her lost lover's brother, Tom - standing over a dead body in her neighbour's backyard. Suddenly, Meg finds herself embroiled in the murder mystery, and increasingly involved with Tom Lagrange. But is he all that he seems? And what exactly was his relationship with the dead woman? Debut author Deborah Burrows has brought her skills as a historian to the fore with this meticulously researched and thoroughly entertaining novel of love and intrigue.

Buy A Stranger in My Street by Deborah Burrows from Australia's Online Independent Bookstore, Boomerang Books.

Other Editions - A Stranger in My Street by Deborah Burrows 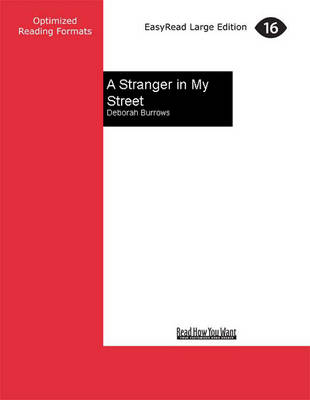 Book Reviews - A Stranger in My Street by Deborah Burrows

» Have you read this book? We'd like to know what you think about it - write a review about Stranger in My Street book by Deborah Burrows and you'll earn 50c in Boomerang Bucks loyalty dollars (you must be a Boomerang Books Account Holder - it's free to sign up and there are great benefits!)

Book Review: Stranger in My Street by Deborah Burrows - Reviewed by Shelleyrae (02 Jun 2012)

A Stranger in My Street is an enjoyable novel that blends mystery, romance and wartime history. It is a hot summer evening in 1943 when Meg Eaton and Captain Tom Legrange discover the body of Mrs Doreen Luca in an air raid shelter. It is assumed her husband, home on leave, one of 'those' passionate Italians, stabbed her in a fit of jealousy and rage but neither Meg nor Tom are so sure. Despite their awkward relationship, the pair are caught up in a desire to solve the mystery of her death which leads them from Meg's quiet suburban neighborhood to the dance halls of Perth amongst the rowdy American servicemen.

Though A Stranger in My Street has a mystery at its core, it is more than a simple who-dunnit. Burrows has created a novel rich with history, romance and interesting themes. The novel is well paced and the characters are appealing. A twenty one year old stenographer who lives with her widowed mother and sister, Meg Eaton lost her lover in combat and has been grieving for the last eighteen months. The unexpected appearance of Captain Tom Legrange, her boyfriends older brother, and the discovery of her murdered neighbour is the catalyst for Meg's recovery. Meg is sweetly naive, which is typical of the time, yet has a steady core of intelligence and resilience that gives her character depth. The former Rhodes Scholar, member of Perth's social elite and older brother of Meg's deceased lover, Captain Tom Legrange is an enigmatic character haunted by his POW experiences, painful wounds and secrets he struggles to hide. Despite his engagement to a society darling, he is drawn to Meg's optimism and innocence which contrasts with his own tortured darkness. The mutual attraction that develops between Meg and Tom is complicated not only by their connection to Peter but by their individual circumstances, they are opposites in social status, and worldly experience. The romance is built up slowly over the course of the novel but is contained within the story so that it doesn't overwhelm the plot. World War II had a significant impact on Australia, despite being far from the front lines. The usual privations of wartime such as rationing, shortages and blackouts were in effect, women were pressed into employment in greater numbers, Germans, Italians and Japanese were interred in camps as 'enemy aliens' while hundreds of thousands of men went to war and never returned, and those that did were often badly injured and suffering shock. For some, particularly those in capital cities like Perth the general deprivations of war were mitigated by the presence of thousands of American servicemen, who introduced economic and social change. Burrows integrates the social and cultural circumstances of the period seamlessly into the novel with vivid and authentic detail. I particularly enjoyed the setting for this novel, largely because of my familiarity with the city of Perth. Meg strolls through the Stirling Gardens, passes The Swan Brewery and gazes out across the Swan River and though it has been more than twenty years since I was last there, images of the landmarks mentioned flashed through my mind. I admit to knowing little about the city during wartime though and was impressed with how Burrows captured the atmosphere of the period with interesting details.

A Stranger in My Street is an entertaining debut from Australian novelist Deborah Burrows that is sure to appeal to a wide audience.

Deborah Burrows is a lawyer and writer and lives in Perth. She works for the WA State Solicitor's Office, in the area of medical law. She also has several degrees in history including a post-graduate degree in medical history from the University of Oxford, where her dissertation was Science in the Witness Box: Expert Medical Testimony in criminal poisoning trials in England 1800-1860 (bringing together her interest in crime, history, medicine and the legal process). This is her first novel.

A Preview for this title is currently not available.
More Books By Deborah Burrows
View All