Life's going down the gurgler for romance writer Lisa Trumperton. The deadline for her next novel is looming, her daughter won't eat but has a new tattoo each week, and now her Wall Street trader husband has run off with a woman at work.

Lisa makes a quick escape, home to Australia, where at least her girl-magnet son seems to be making hay. Determined to grow older disgracefully, she turns her back on a trim and tidy townhouse that is close to shops, aged-care providers and her bossy older sister, instead buying a grand old house in the country that once belonged to her great-grandfather.

But like its new owner, Trumperton Manor has seen better days. Crumbling, filthy and possibly haunted, the old house defies Lisa's attempts to restore it. Add flood, fire and family secrets, plus a stray cat with attitude and an overly familiar handyman, and the cracks begin to show...

Richly observed and laugh-out-loud funny, Tumbledown Manor is for anyone who believes it's never too late for a makeover. 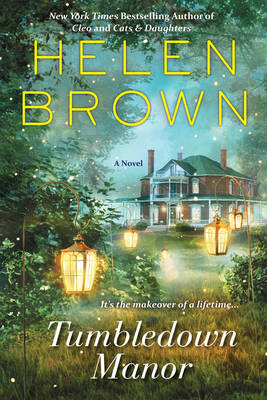 » Have you read this book? We'd like to know what you think about it - write a review about Tumbledown Manor book by Helen Brown and you'll earn 50c in Boomerang Bucks loyalty dollars (you must be a Boomerang Books Account Holder - it's free to sign up and there are great benefits!)

Helen Brown grew up in New Zealand where she became an award-winning newspaper and magazine columnist as well as a popular scriptwriter. Helen's memoirs Cleo and After Cleo became international bestsellers and are available in a vast array of countries and languages. A New York Times bestseller, Cleo is also currently being made into a film by the producers of The Whale Rider. Like the main character of Tumbledown Manor, Helen has ancestral ties with rural Victoria from back in the gold rush days. She lives in Melbourne with her husband Philip and temperamental cat, Jonah. She has three adult children and two granddaughters.

A Preview for this title is currently not available.
More Books By Helen Brown
View All