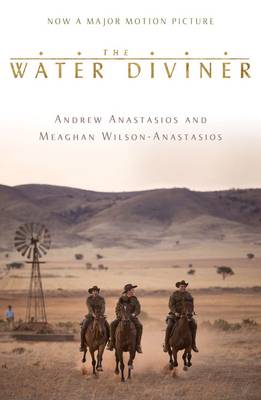 Constantinople, 1919. Joshua Connor, an Australian farmer, arrives in Turkey to fulfil a pledge made on his wife's grave - to find the bodies of their three sons, lost in Gallipoli, and bring them home.

In the enemy city Connor meets Orhan, a mischievous Turkish boy, and his mother Ayshe, who is struggling to keep her family hotel afloat and rebuild her life after the war.

Connor can trace life-giving water under the earth, but finding his sons at Gallipoli seems impossible when faced with the gruesome landscape of sun-bleached bones and rotting uniforms. But a Turkish officer gives the broken father hope where there was none. - Connor's eldest son may be alive.

As Connor risks his life travelling into the heart of Anatolia one question haunts him: If his son is alive why hasn't he come home?

This novel tells the complete story of The Water Diviner and is based on the original screenplay by Andrew Anastasios and Andrew Knight. It is inspired by true events found within personal accounts and official records from the Great War.

Other Editions - The Water Diviner by Andrew Anastasios » Have you read this book? We'd like to know what you think about it - write a review about Water Diviner book by Andrew Anastasios and you'll earn 50c in Boomerang Bucks loyalty dollars (you must be a Boomerang Books Account Holder - it's free to sign up and there are great benefits!)

Andrew Anastasios is a script researcher and writer for film and television via a career in archaeology, journalism and advertising. Andrew's credits include the Jack Irish telemovies and the adaptation of Peter Temple's Broken Shore. He co-wrote the film script for The Water Diviner with Andrew Knight. Meaghan Wilson-Anastasios, also a former archaeologist, has a PHD in art history and cultural economics. She teaches, researches and writes for film and television.