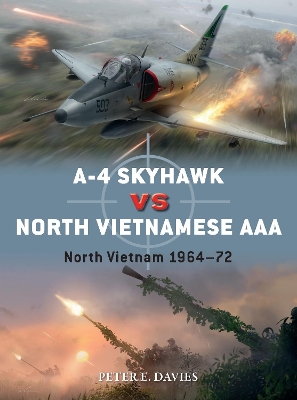 While the F 105 Thunderchief was the USAF's principal strike weapon during the Rolling Thunder campaign, the US Navy relied on the Douglas A-4 Skyhawk for the majority of its strikes on North Vietnam. The Skyhawk entered service in 1956 and remained in continuous production for 26 years. Throughout Operation Rolling Thunder it was the US Navy's principal day time light strike bomber, remaining in use after its replacement, the more sophisticated A-7 Corsair II, began to appear in December 1967.

During the 1965-68 Rolling Thunder period, up to five attack carriers regularly launched A-4 strike formations against North Vietnam. These formations faced an ever-expanding and increasingly coordinated Soviet-style network of anti-aircraft artillery missiles and fighters. Skyhawk pilots were often given the hazardous task of attacking anti-aircraft defences and to improve accuracy, they initially dropped ordnance below 3000 ft in a 30-degree dive in order to bomb visually below the persistent low cloud over North Vietnam, putting the aircraft within range of small-arms fire. The defenders had the advantage of covering a relatively small target area, and the sheer weight of light, medium and heavy gunfire directed at an attacking force brought inevitable casualties, and a single rifle bullet could have the same effect as a larger shell. This illustrated title examines both the A-4 Skyhawk and the Vietnamese AAA defences in context, exploring their history and analysing their tactics and effectiveness during the conflict.

» Have you read this book? We'd like to know what you think about it - write a review about A-4 Skyhawk vs North Vietnamese AAA: North Vietnam 1964-72 book by Peter E. Davies and you'll earn 50c in Boomerang Bucks loyalty dollars (you must be a Boomerang Books Account Holder - it's free to sign up and there are great benefits!)