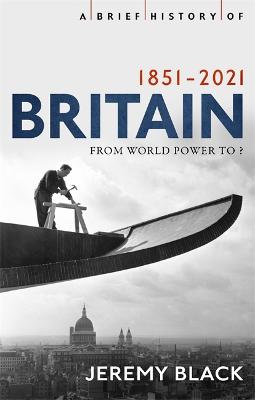 From the Great Exhibition's showcasing of British national achievement in 1851 to the opening ceremonies of the Olympics in Stratford in 2012 and on to Brexit, an insightful exploration of the transformation of modern Britain This revised and updated fourth and final volume in the concise Brief History of Britain series begins in the specially-constructed Crystal Palace, three times the length of St Paul's Cathedral, in Hyde Park at the beginning of the second half of the nineteenth century. The Great Exhibition it housed marked a high point of British national achievement, at the forefront of the Industrial Revolution, at the heart of a great empire, with Queen Victoria still to reign for fifty years. It was a time of confidence in the future, and exuberant patriotism for Britain's role in it. The beginning of the Second World War in 1939 marks a turning point because of the great change it heralded in Britain's global standing. At its peak, protected by the world's greatest navy, the British Empire stretched from Australasia to Canada, from Hong Kong and India to South Africa, and from Jamaica to the Falklands. Now the empire is no more: a fundamental change not only for the world, but also for Britain. The Second World War had been won, but it had exhausted Britain and marked the beginning of its national decline. Black links cultural and political developments closely - transport, health, migration and economic and demographic factors - in order to make clear how porous and changeable the manifestations of national civilisation can be, and to make sense of themes such as the triumph of town over country, Britain's international clout and the shift from the dominance of the market at the turn of the nineteenth century to the growing significance of the state. Importantly, he also looks at how public history has presented the nation's past, and how the changing and different ways we look at that past are central aspects of our shared history.

Buy A Brief History of Britain 1851-2021: From World Power to ? by Jeremy Black from Australia's Online Independent Bookstore, Boomerang Books.

» Have you read this book? We'd like to know what you think about it - write a review about A Brief History of Britain 1851-2021: From World Power to ? book by Jeremy Black and you'll earn 50c in Boomerang Bucks loyalty dollars (you must be a Boomerang Books Account Holder - it's free to sign up and there are great benefits!)


A Preview for this title is currently not available.
More Books By Jeremy Black
View All

A Brief History of the Mediterranean: Indispensable for Travellers
$18.39 $22.99