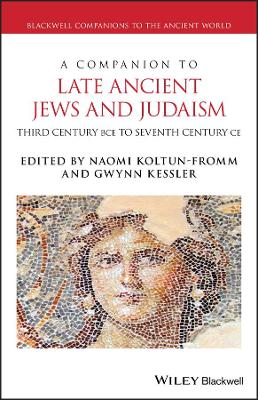 An innovative approach to the study of ten centuries of Jewish culture and history
A Companion to Late Ancient Jews and Judaism explores the Jewish people, their communities, and various manifestations of their religious and cultural expressions from the third century BCE to the seventh century CE. Presenting a collection of 30 original essays written by noted scholars in the field, this companion provides an expansive examination of ancient Jewish life, identity, gender, sacred and domestic spaces, literature, language, and theological questions throughout late ancient Jewish history and historiography.
Editors Gwynn Kessler and Naomi Koltun-Fromm situate the volume within Late Antiquity, enabling readers to rethink traditional chronological, geographic, and political boundaries. The Companion incorporates a broad methodology, drawing from social history, material history and culture, and literary studies to consider the diverse forms and facets of Jews and Judaism within multiple contexts of place, culture, and history. Divided into five parts, thematically-organized essays discuss topics including the spaces where Jews lived, worked, and worshiped, Jewish languages and literatures, ethnicities and identities, and questions about gender and the body central to Jewish culture and Judaism. Offering original scholarship and fresh insights on late ancient Jewish history and culture, this unique volume:

Offers a one-volume exploration of "second temple," "Greco-Roman," and "rabbinic" periods and sources

Features original maps of areas cited in every essay, including maps of Jewish settlement throughout Late Antiquity

» Have you read this book? We'd like to know what you think about it - write a review about A Companion to Late Ancient Jews and Judaism: 3rd Century BCE - 7th Century CE book by Gwynn Kessler and you'll earn 50c in Boomerang Bucks loyalty dollars (you must be a Boomerang Books Account Holder - it's free to sign up and there are great benefits!)


A Preview for this title is currently not available.
More Books By Gwynn Kessler
View All