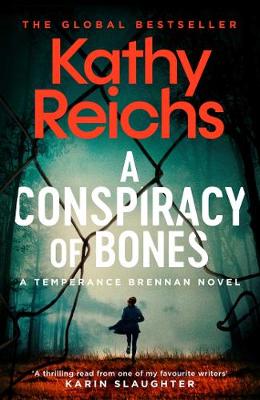 A Conspiracy of Bones

Description - A Conspiracy of Bones by Kathy Reichs

Number One New York Times bestselling author Kathy Reichs returns with her nineteenth riveting novel featuring forensic anthropologist Temperance Brennan, who must use all her tradecraft to discover the identity of a faceless corpse, its connection to a decade-old missing child case, and why the dead man had her phone number.

It's sweltering in Charlotte, North Carolina and Temperance Brennan, still recovering from neurosurgery following an aneurysm, is battling nightmares, migraines, and what she thinks might be hallucinations when she receives a series of mysterious text messages, each containing a new picture of a corpse that is missing its face and hands. Immediately, she's anxious to know who the dead man is, and why the images were sent to her.

An identified corpse soon turns up, only partly answering her questions.

To win answers to the others, including the man's identity, she must go rogue. With help from a number of law enforcement associates including her Montreal beau Andrew Ryan and the always-ready-with-a-smart-quip, ex-homicide investigator Skinny Slidell, and utilizing new cutting-edge forensic methods, Tempe draws closer to the astonishing truth.

But the more she uncovers, the darker and more twisted the picture becomes ...

'Kathy Reichs writes smart-no, make that brilliant-mysteries that are as realistic as non-fiction and as fast-paced as the best thrillers about Jack Reacher or Alex Cross' James Patterson

'Nobody does forensics thrillers like Kathy Reichs. She's the real deal' David Baldacci

'Kathy Reichs continues to be one of the most distinctive and talented writers in the genre. Her legions of readers worldwide will agree with me when I declare that the more books she writes, the more enthusiastic fans she'll garner' Sandra Brown

'Each book in Kathy Reichs's fantastic Temperance Brennan series is better than the last. They're filled with riveting twists andturns. No matter how many novels she writes, I just can't get enough!' Lisa Scottoline

'Brennan is a winner, and so is Reichs'Daily News

'This is Kathy Reichs as maybe you've never read her before. The story starts like a pistol shot and fires nonstop through over three hundred layered pages. The twists are meticulously planned and thrown like bamboozling curves on the edge of the plate. But you will see new layers to the brilliant Tempe Brennan that may surprise you. Read this book. It was created by a master of the genre who knocks it out of the park.' David Baldacci, bestselling author of One Good Deed and Redemption

'Nobody writes a more imaginative thriller than Kathy Reichs or crafts a better sentence. Her latest forensic investigation, A Conspiracy of Bones, rivets with its non-stop pursuit of some of the vilest villains ever.' Clive Cussler, bestselling author of Night Probe and Sahara

'Sinister and chilling. In Tempe Brennan's riveting return to the investigative trail, she suddenly finds herself caught in a tangled web. Who can she trust? Maybe not even herself. Bones is back and better than ever.' Lisa Gardner, bestselling author of Never Tell,Look for Me, and Right Behind You

'It's a pleasure to see Temperance returning to what she does best, peeling back the layers and using her forensic brilliance to expose a shocking cover-up...A Conspiracy of Bones offers page-turning proof that Kathy Reichs won't be giving up her forensic-anthropologist-in-distress throne anytime soon.' David Morrell, bestselling author of Murder As a Fine Art

'Tempe Brennan is back, dealing with health issues, career setbacks, and the nagging-and driving-fear of inadequacy that is the flipside of her talent. Reich's fast-paced, tightly-constructed, and very contemporary story dives underground here, both literally and virtually, as she follows the thinnest of threads deeper and deeper into a shocking conspiracy. You will find it hard to put down.' Mark Bowden, bestselling author of The Last Stone and Black Hawk Down

'No face, no hands, and a ton of breathtaking questions. I dare you to figure out all the red herrings. So utterly good! This is Kathy Reichs doing what she does best: sorting through the bones until the shocking end.' Brad Meltzer, bestselling author of The Escape Artist

'A Conspiracy of Bones shows off Kathy Reichs' dazzling new level of plotting mastery. A thrilling read from one of my favorite writers.' Karin Slaughter, bestselling author of The Lost Widow, Pieces of Her, and Cop Town

'One of the absolute best thrillers of the year! Both Temperance Brennan and Kathy Reichs are at the top of their games in this brilliant rollercoaster of a tale. I can't recall when this many twists have been so masterfully woven into a novel. But, of course, it's not all about plot. The characters, too-good, bad and in between-come breathtakingly alive with heart-gripping effect. A great series has just gotten greater.' Jeffery Deaver, bestselling author of The Bone Collector and The Never Game

'Don't miss this one! The corpse is ghastly. The investigation is intense. So many pulse-pounding twists and surprises-it kept me guessing till the end!' R.L. Stine, bestselling author of Goosebumps and Fear Street

Other Editions - A Conspiracy of Bones by Kathy Reichs 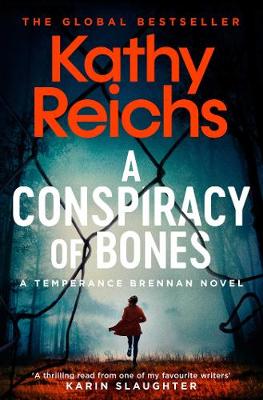 Book Reviews - A Conspiracy of Bones by Kathy Reichs

» Have you read this book? We'd like to know what you think about it - write a review about A Conspiracy of Bones book by Kathy Reichs and you'll earn 50c in Boomerang Bucks loyalty dollars (you must be a Boomerang Books Account Holder - it's free to sign up and there are great benefits!)

Book Review: A Conspiracy of Bones by Kathy Reichs - Reviewed by CloggieA (01 Jun 2020)

A Conspiracy of Bones is the nineteenth book in the Temperance Brennan series by best-selling American anthropologist and author, Kathy Reichs. Life has turned upside down on anthropologist Tempe Brennan: apart from distracting family dramas and her own medical diagnosis, Ryan and Slidell have abandoned their police force jobs to start up a PI business. But most disturbing of all is that the new boss at MCME has a sizeable grudge against Tempe and is freezing her out of her usual consultancy there.

Margot Heavner, appointed after Larabee’s murder, seems to be oriented to maximum publicity at the expense of ethics. She and Tempe locked horns over the case of a murdered child, and now she is being excluded from a strange new case: a faceless, fingerless, gutless body that Heavner has already implied to the press is a murder victim.

But apparently someone wants Tempe involved: she has been sent, anonymously, pictures of the body. Tempe has another ally at the MCME, and she manages to get her own photos, a sample and information about the autopsy. And what she sees raises one puzzling question: why is Heavner lying about the body?

Can Tempe resist getting involved? If she can discreetly investigate and identify the victim, is she doing it for the right reasons? Because publicly proving Heavner wrong and ending her exile from the lab is an attractive proposition. Slidell, if initially hesitant to get involved, becomes quite interested when links to a certain missing-child cold case become apparent.

Tempe does exasperate: her tendency to jump, alone, into a potentially dangerous situation against all reasonable advice is starting to wear a little thin. However, the snappy dialogues between Tempe and Slidell, Tempe and Ryan are a joy, and there is lots of clever detective work done by both Tempe and Slidell.

A Preview for this title is currently not available.
More Books By Kathy Reichs
View All