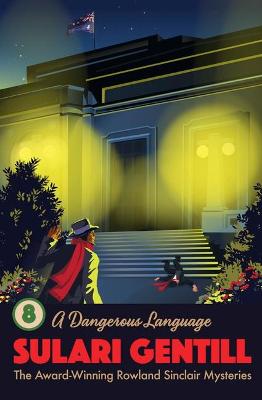 Volunteering his services as a pilot to fly renowned international peace advocate Egon Kisch between Fremantle and Melbourne, Rowland is unaware how hard Australia's new attorney-general will fight to keep the "raging reporter" off Australian soil. this, it seems, the government is not alone, as clandestine right-wing militias reconstitute into deadly strike forces. A disgraced minister, an unidentified corpse and an old flame all bring their own special bedlam. Once again Rowland Sinclair stands against the unthinkable, with an artist, a poet and a brazen sculptress by his side.

Other Editions - A Dangerous Language by Sulari Gentill 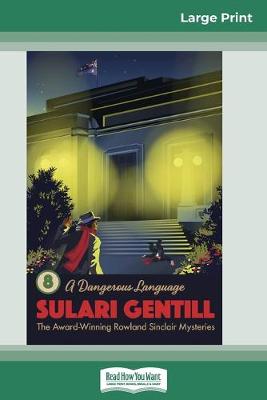 » Have you read this book? We'd like to know what you think about it - write a review about A Dangerous Language book by Sulari Gentill and you'll earn 50c in Boomerang Bucks loyalty dollars (you must be a Boomerang Books Account Holder - it's free to sign up and there are great benefits!)

5 stars A Dangerous Language is the eighth book in the Rowland Sinclair series by award-winning Australian author, Sulari Gentill. Spring 1934 sees Rowland Sinclair and his artistic friends in Canberra. Rowly has just replaced his beloved but written-off Mercedes with a Chrysler Airflow Eight, with which a drive to the ACT will also serve the purpose of delivering Milton Isaacs in situ for a little surveillance job.

Outspoken Czechoslovakian novelist, journalist and activist, Egon Kisch is en route to Australia to address the Movement Against War and Fascism, and timely word of any political moves to bar his entry will allow them to be countered without delay. To that end, Rowly has volunteered to fly Kisch from Fremantle to Melbourne on the quiet. But the best laid plans…

And it seems that some in the nation’s capital are displeased with the presence of Rowly and his left-leaning friends. Milt’s contact is murdered on the steps of Parliament House, and that’s just the beginning of a series of events that put Rowly and his friends in mortal danger, several times.

In this instalment, Gentill again serves up plenty of fascinating historical detail, giving a few famous (and infamous) figures and cameos (and some, more significant roles). There are twists and red herrings aplenty, leading to several exciting climaxes. And as always, the banter between the characters provides plenty of humour.

Also in this instalment, Edna is plagued by a persistent beau while Rowly is targeted for scandalous self-serving scheme by a past passion. A brawl, a hit-and-run accident, assaults with a knife, targeting of communists and sympathisers and, in between all these, Rowly does get to fly a De Haviland Comet. As usual, quite a bit of what he and his friends get up to meets the disapproval of his conservative older brother, Wilfred.

Press clippings of the time that preface the chapters cleverly serve the purpose of providing information related to the text that follows, as well as depicting social attitudes of the era. As always, Gentill effortlessly evokes the era. Once again, a brilliant dose of Australian historical crime fiction. Readers by now hooked will appreciate knowing they can look forward to at least two more instalments of this award-winning series, beginning with All The Tears In China (aka Shanghai Secrets). This unbiased review is from an uncorrected proof copy provided by NetGalley and Poisoned Pen Press.


A Preview for this title is currently not available.
More Books By Sulari Gentill
View All