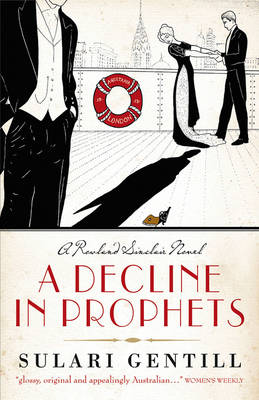 A Decline in Prophets

Description - A Decline in Prophets by Sulari Gentill

In 1932, the RMS Aquitania embodies all that is gracious and refined, in a world gripped by crisis and doubt. Returning home on the luxury liner after months abroad, Rowland Sinclair and his companions dine with a suffragette, a Bishop and a retired World Prophet. The Church encounters less orthodox religion in the Aquitania's chandeliered ballroom, where men of God rub shoulders with mystics in dinner suits. The elegant atmosphere on board is charged with tension, but civility prevails...until people start to die. Then things get a bit awkward. And Rowland finds himself unwittingly in the centre of it all.

Other Editions - A Decline in Prophets by Sulari Gentill 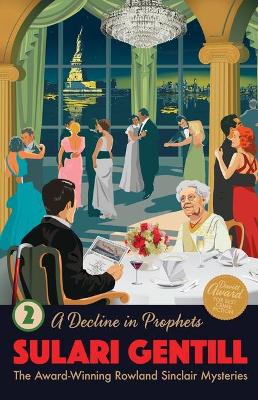 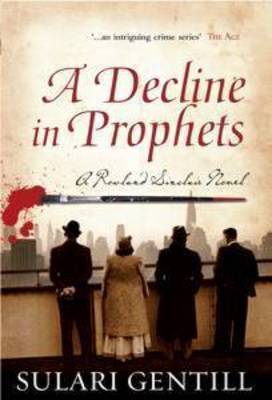 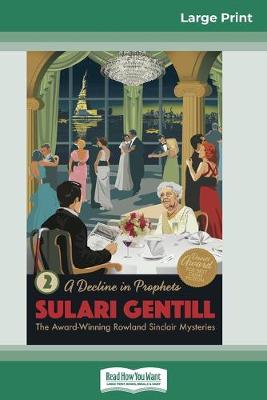 Book Reviews - A Decline in Prophets by Sulari Gentill

» Have you read this book? We'd like to know what you think about it - write a review about A Decline in Prophets book by Sulari Gentill and you'll earn 50c in Boomerang Bucks loyalty dollars (you must be a Boomerang Books Account Holder - it's free to sign up and there are great benefits!)

Book Review: A Decline in Prophets by Sulari Gentill - Reviewed by CloggieA (29 Dec 2019)

5 stars A Decline in Prophets is the second book in the Rowland Sinclair series by award-winning Australian author, Sulari Gentill. Returning to Sydney from a voluntary exile of several months abroad, gentleman artist Rowland Sinclair and his quirky artistic friends (Edna the sculptress, Milton the poet and Clyde the artist) occupy luxury suites aboard the RMS Aquitania. But, despite the presence of peace-loving Theosophists, not all of those on board exhibit tolerance of their fellow passengers.

By the time the Aquitania docks in Sydney, there have been three murders and several attempted murders. And it doesn’t end there: among former passengers, another suspicious death and further attacks occur. The diversity among the victims is enough to confuse the police as to motive and Rowly and his friends are unconvinced about possible suspects.

At home, his older brother Wilfred and sister-in-law Kate seem intent on matching Rowly up with a suitable wife, hoping to increase his respectability. But at every turn, Rowly’s situation very publicly becomes more complicated and his reputation suffers a further setback, attracting censure from his conservative family and his brother’s ire: “You’re not happy about it! You don’t intend it! And yet you carry on moving around in the midst of your own personal crime wave.”

Gentill gives the reader an excellent plot with several red herrings and a dramatic climax. Her cast of realistically flawed characters are mostly endearing, with a few contemptible ones to give balance. And of course, there’s Rowland: an appealing, can-do sort of guy, intelligent, a bit unconventional but full of integrity, which is reflected by loyalty of the friends he attracts.

Quotes from press articles of the time that preface the chapters cleverly serve the purpose of providing some of the background politics, current events or phenomena relevant to the text that follows. Gentill's extensive research is apparent on every page, but this is no dry history lesson: the facts drop into the story unobtrusively; there’s also plenty of humour, especially in the banter between the friends.

In this instalment, Milt claims to see people’s auras (with the right chemical assistance), Clyde is sent to attend mass, Edna dates a soon-to-be-famous actor and Rowly manages to be a suspect, amateur investigator and, several times, almost the victim of murder. He acquires a godson and is tempted by a Gipsy Moth. Several famous figures make cameo appearances.

As always, Gentill captures the era perfectly. This is a superb dose of Australian historical crime fiction, and readers who enjoy it will be pleased to know they can look forward to a further eight (at least) instalments of this award-winning series, beginning with Miles Off Course.


A Preview for this title is currently not available.
More Books By Sulari Gentill
View All