A Fast Ride Out of Here

Confessions of Rock's Most Dangerous Man

Description - A Fast Ride Out of Here by Pete Way

'They call me a madman but compared to Pete Way, I'm out of my league.' - Ozzy OsbourneThere are rock memoirs and then there is this one. A Fast Ride Out of Here tells a story that is so shocking, so outrageous, so packed with excess and leading to such uproar and tragic consequences as to be almost beyond compare. Put simply, in terms of jaw-dropping incident, self-destruction and all-round craziness, Pete Way's rock'n'roll life makes even Keith Richards's appear routine and Ozzy Osbourne seem positively mild-mannered in comparison. Not for nothing did Nikki Sixx, bassist with LA shock-rockers Motley Crue and who 'died' for eight minutes following a heroin overdose in 1988, consider that he was a disciple of and apprenticed to Way.During a forty-year career as founding member and bassist of the venerated British hard rock band UFO, and which has also included a stint in his hell-raising buddy Ozzy's band, Pete Way has both scaled giddy heights and plunged to unfathomable lows. A heroin addict for more than ten years, he blew millions on drugs and booze and left behind him a trail of chaos and carnage. The human cost of this runs to six marriages, four divorces, a pair of estranged daughters and two dead ex-wives. Latterly, Way has fought cancer, but has survived it all and is now ready to tell his extraordinary tale. By turns hilarious, heart-rending, mordant, scabrous, self-lacerating, brutally honest and entirely compulsive, A Fast Ride Out of Here will be a monument to rock'n'roll debauchery on an epic, unparalleled scale and also to one man's sheer indestructability.

Other Editions - A Fast Ride Out of Here by Pete Way 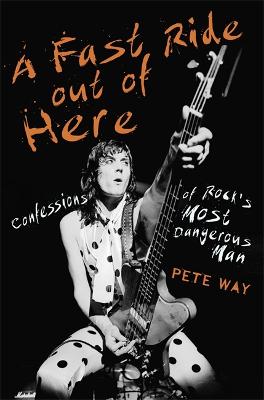 Book Reviews - A Fast Ride Out of Here by Pete Way

» Have you read this book? We'd like to know what you think about it - write a review about A Fast Ride Out of Here book by Pete Way and you'll earn 50c in Boomerang Bucks loyalty dollars (you must be a Boomerang Books Account Holder - it's free to sign up and there are great benefits!)

Pete Way has established himself as a much-loved and highly regarded figure among rock fans, critics and fellow musicians alike. Best known for his work with UFO, Pete's energetic live performances were at the heart of the band's countless world tours, and his melodic basslines underpinned the catalogue of enduring rock classics upon which UFO's reputation and legacy are founded. Pete's post-UFO work has included stints with Fastway (alongside members of Motorhead and Humble Pie), Ozzy Osbourne, and his own long-running band Waysted. Pete's keen ear for song arrangement has also seen him serve as producer for popular Hard Rock acts such as Twisted Sister and the Cockney Rejects. Pete is currently working on a solo album, Walking On The Edge.

A Preview for this title is currently not available.
More Books By Pete Way
View All