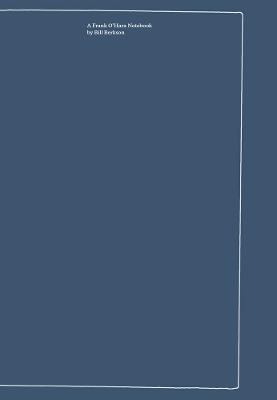 A fascinating account of Frank O'Hara in the prime of his creative life in New York, told through notes, images, and poems by his friend Bill Berkson.Poet and art critic Bill Berkson (1939-2016) had planned for many years to write a lengthy study on his friend and mentor Frank O'Hara (1926-1966) but died with the project still incomplete. This volume reproduces the sketchbook in which Berkson gathered notes, images, and poems about O'Hara, focusing on his memories of their collaborations in New York, from their initial meeting in 1960 to O'Hara's untimely death in 1966. A Frank O'Hara Notebook offers a fascinating first-person account of the heyday of O'Hara's creative life, and memorably sketches the heady social milieus of the poetry and art worlds of New York that O'Hara inhabited in the early 1960s. In addition to an exact-scale photographic reproduction of Berkson's handwritten notebook, this volume includes a typesetting of Berkson's notes and two texts on O'Hara derived from these notes published under Berkson's direction, titled "A Frank O'Hara File" and "What Frank O'Hara Was Like." The book shows the evolution of Berkson's ideas from notes to fragmentary phrases and sentences into finished pieces of writing. Ultimately, this collection reveals as much about Berkson's writing practice as it does about his famous subject and friend.
The book's translation of Berkson's handwritten notes and collaged material into type honors the idiosyncratic format of Berkson's handwritten text, precisely following the line breaks, capitalizations, and drawn graphic elements in the holograph. The book also includes an introduction by fellow New York School poet Ron Padgett and an afterword by Berkson's wife, curator Constance Lewallen.

» Have you read this book? We'd like to know what you think about it - write a review about A Frank O'Hara Notebook book by Bill Berkson and you'll earn 50c in Boomerang Bucks loyalty dollars (you must be a Boomerang Books Account Holder - it's free to sign up and there are great benefits!)


A Preview for this title is currently not available.
More Books By Bill Berkson
View All