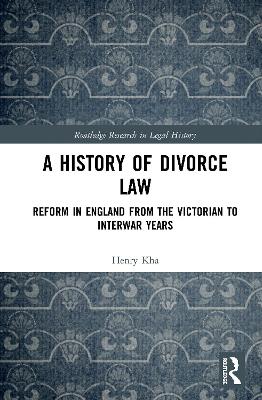 A History of Divorce Law: Reform in England from the Victorian to Interwar Years

Description - A History of Divorce Law: Reform in England from the Victorian to Interwar Years by Henry Kha

The book explores the rise of civil divorce in Victorian England, the subsequent operation of a fault system of divorce based solely on the ground of adultery, and the eventual piecemeal repeal of the Victorian-era divorce law during the Interwar years. The legal history of the Matrimonial Causes Act 1857 is at the heart of the book. The Act had a transformative impact on English law and society by introducing a secular judicial system of civil divorce. This swept aside the old system of divorce that was only obtainable from the House of Lords and inadvertently led to the creation of the modern family justice system. The book argues that only through understanding the legal doctrine in its wider cultural, political, religious, and social context is it possible to fully analyse and assess the changes brought about by the Act. The major developments included the end of any pretence of the indissolubility of marriage, the statutory enshrinement of a double standard based on gender in the grounds for divorce, and the growth of divorce across
all spectrums of English society. The Act was a product of political and legal compromise between conservative forces resisting the legal introduction of civil divorce and the reformers, who demanded married women receive equal access to the grounds of divorce. Changing attitudes towards divorce that began in the Edwardian period led to a gradual rejection of Victorian moral values and the repeal of the Act after 80 years of existence in the Interwar years.

The book will be a valuable resource for academics and researchers with an interest in legal history, family law, and Victorian studies.

Buy A History of Divorce Law: Reform in England from the Victorian to Interwar Years by Henry Kha from Australia's Online Independent Bookstore, Boomerang Books.

Book Reviews - A History of Divorce Law: Reform in England from the Victorian to Interwar Years by Henry Kha

» Have you read this book? We'd like to know what you think about it - write a review about A History of Divorce Law: Reform in England from the Victorian to Interwar Years book by Henry Kha and you'll earn 50c in Boomerang Bucks loyalty dollars (you must be a Boomerang Books Account Holder - it's free to sign up and there are great benefits!)