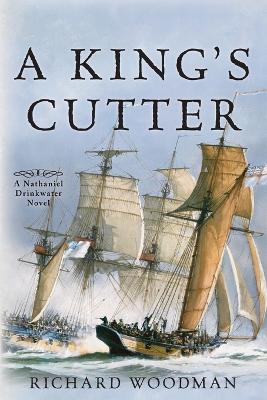 It is 1792 and Nathaniel Drinkwater is back in the Royal Navy, this time appointed to the twelve-gun cutter Kestrel, commanded by the inscrutable Madoc Griffiths. With the gathering menace of the French Revolution, he is involved in secret and dangerous operations off the French Coast including the rescue of emigres and the landing of agents.
As Europe plunges deeper into war, Kestrel takes part in the struggle for supremacy in the Channel and Drinkwater has some sinister encounters with Edouard Santhonax, a man who is stirring up interest with British government agents.
Through Drinkwater's initiative I the network of intrigue is discovered, but the Royal Navy is paralyzed by mutiny. Will Kestrel have to stand alone between the Dutch Fleet and disaster? Events come to a climax at Camperdown and in the aftermath of the bloody battle, Drinkwater and his opponent come face to face.

» Have you read this book? We'd like to know what you think about it - write a review about A King's Cutter: A Nathaniel Drinkwater Novel #2 book by Richard Woodman and you'll earn 50c in Boomerang Bucks loyalty dollars (you must be a Boomerang Books Account Holder - it's free to sign up and there are great benefits!)


A Preview for this title is currently not available.
More Books By Richard Woodman
View All