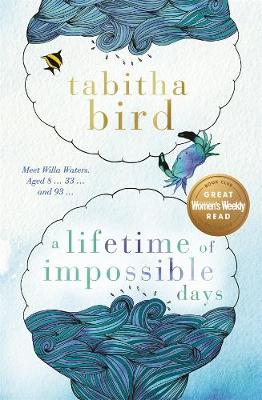 A Lifetime of Impossible Days

Description - A Lifetime of Impossible Days by Tabitha Bird

Tabitha Bird's stunning debut is a magical, life-affirming novel about heartbreak, healing and learning to forgive yourself.

'Prepare to immerse yourself in wonder, childish delight and dark, dark trauma in this unique novel from a new and important Australian literary voice' Australian Women's Weekly

'Every so often a book comes along that reaffirms the glory and beauty of life. Tabitha Bird has gifted us this wonder' Cass Moriarty
Meet Willa Waters, aged 8 . . . 33 . . . and 93.

On one impossible day in 1965, eight-year-old Willa receives a mysterious box containing a jar of water and the instruction- 'One ocean- plant in the backyard.' So she does - and somehow creates an extraordinary time slip that allows her to visit her future selves.

On one impossible day in 1990, Willa is 33 and a mother-of-two when her childhood self magically appears in her backyard. But she's also a woman haunted by memories of her dark past - and is on the brink of a decision that will have tragic repercussions . . .

On one impossible day in 2050, Willa is a silver-haired, gumboot-loving 93-year-old whose memory is fading fast. Yet she knows there's something she has to remember, a warning she must give her past selves about a terrible event in 1990. If only she could recall what it was.

Can the three Willas come together, to heal their past and save their future, before it's too late?
'A magical tale of healing . . . it's sure to cast a spell over readers' Mindfood magazine

'A wonderful debut . . . An uplifting story about the power of forgiveness, the ability to heal and the magical idea of being able to travel back in time to fix a broken future.' Good Reading Magazine

'A courageous and magical debut novel that reminds us that while we can't change events from our past, we do have the power to change the story we tell ourselves about them.' Sally Piper

Other Editions - A Lifetime of Impossible Days by Tabitha Bird 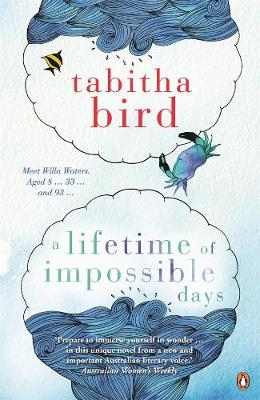 Book Reviews - A Lifetime of Impossible Days by Tabitha Bird

» Have you read this book? We'd like to know what you think about it - write a review about A Lifetime of Impossible Days book by Tabitha Bird and you'll earn 50c in Boomerang Bucks loyalty dollars (you must be a Boomerang Books Account Holder - it's free to sign up and there are great benefits!)

5 sta“I'm trying to think of something snarky to say to you, Katie. But at my age it might take a while and I haven't the time. Think of it yourself and pretend I said it.”

A Lifetime of Impossible Days is the first novel of Australian author, Tabitha Ann Bird. Impossible things keep happening to Willa Grace Waters. They are happening in 1965 to eight-year-old Willa in an ugly, leaky-roofed tin shack In Boonah where she lives with Mummy and Daddy and her little sister, Lottie.

They are happening in 1990 to thirty-three-year-old Willa in the brick house in north Brisbane where she is wife to wonderful Sam and mother of Eli and Sebastian.

And they are happening in 2050 to ninety-three-year-old Willa in the lovely old Queenslander in Boonah, from which several people seem intent on moving her. Willa is resisting: her memory may not be so good, but her notebook (Things I Am Sure of) tells her “stay out of the nursing home”.

The impossible things all seem to have something to do with an old strawberry jam jar with a dribble of greyish water in the bottom. It came through the Post in a soggy cardboard box with a card: “One ocean: plant in the backyard.”

What happens when (eight-year-old) Super Gumboots Willa plants the ocean under the mango tree (impossible, surely?) makes her believe there’s a way to save Lottie and Mummy from Daddy: not the Daddy who stands looking up at the stars, but the angry Daddy who shouts and hits and hurts.

Bird’s portrayal of senile dementia is an insightful and sensitive one: Silver Willa’s thought processes and the utterances that ensue show just how poor memory, distraction, confusion and occasionally flawed logic can lead to seemingly meaningless sentences. Often, Silver Willa is simply, dementedly delightful: “In my notebook I write: 13. Find something 14. Find something 15. Find something 16. Find something 17. Find something She reads over my shoulder. ‘You've written “Find something” five or six times already.’ ‘Fifty-six times? It must be important, then. Where would you go if you were a lost thing?’” And to anyone who has filled the role of carer for an elderly, semi-demented loved one, Eden's reactions, her exasperation born of love and frustration, will seem entirely natural.

There’s so much magic in this book, so much fun: brightly-coloured gumboots, midnight teas, timeslips, scare-conquering stories, Chihuahuas with silly names, Viking forts under beds and jam drops (recipe provided!); there’s lots of laughter, but also tears and sadness; much bravery, kindness and love; many wise words.

This is a heart-warming story that asks: Can we change the past? If not, can we change how we handle it? If you could, what would you tell your younger self? What would you ask your older self? A marvellous debut novel from a talented author.


A Preview for this title is currently not available.
More Books By Tabitha Bird
View All