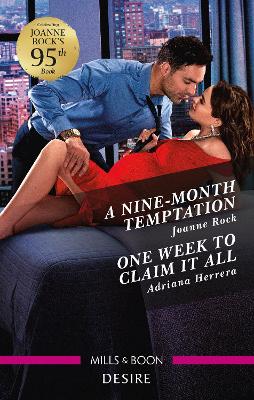 A Nine-Month Temptation/One Week to Claim It All

One night rocked their world. Now can they tame their passion for their baby's sake?

Ever since their mind-blowing encounter months ago, fashion CEO Roman Zayn hasn't stopped hungering for Sable Cordero. But as a rising star in his brother's design studio, the intoxicating celebrity stylist is strictly off-limits. Even when Roman discovers Sable is pregnant and steps in to offer support, further intimacy between them feels forbidden. But resistance to an attraction like theirs just may prove futile...

One Week To Claim It All - Adriana Herrera

She's on track to be the new CEO. Her ex is the only one standing in the way.

When Esmeralda Sambrano-Pena unexpectedly inherits her father's media empire, it ruffles more than a few feathers. And no one is more conflicted about it than Rodrigo Almanzar. Esmeralda knows her father's longtime protege - and her ex-lover - wants the executive job for himself. Making matters worse, their renewed passion grows undeniable with every late-night meeting. Will Rodrigo prove to be the perfect partner in business and pleasure...or her professional undoing?

Buy A Nine-Month Temptation/One Week to Claim It All by Adriana Herrera from Australia's Online Independent Bookstore, Boomerang Books.

» Have you read this book? We'd like to know what you think about it - write a review about A Nine-Month Temptation/One Week to Claim It All book by Adriana Herrera and you'll earn 50c in Boomerang Bucks loyalty dollars (you must be a Boomerang Books Account Holder - it's free to sign up and there are great benefits!)