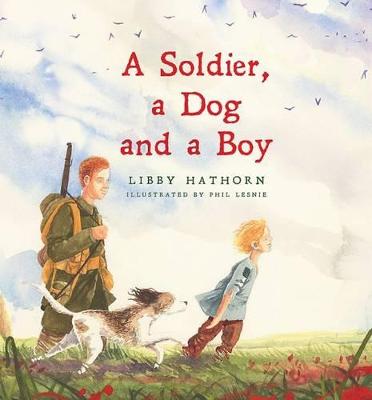 A Soldier, A Dog and A Boy

Description - A Soldier, A Dog and A Boy by Libby Hathorn

Selected as a CBCA (Children's Book Council of Australia) Notable Picture Book of the Year 2017From award-winning Australian author Libby Hathorn and acclaimed illustrator Phil Lesnie, an exquisitely illustrated and deeply moving story of the Somme.A moving story, told completely in dialogue, about a young Australian soldier in the battle of the Somme. Walking through the fields away from the front, he finds what he thinks is a stray dog, and decides to adopt it as a mascot for his company. Then he meets Jacques, the homeless orphan boy who owns the dog. The soldier realises that Jacques needs the dog more - and perhaps needs his help as well.With stunning illustrations from Phil Lesnie, this is a deeply moving celebration of friendship in times of war, Perfect for Anzac Day and Remembrance Day.A SOLDIER, A DOG AND A BOY was inspired by Libby Hathorn's months of research on her uncle, who survived Gallipoli but went on to fight at the Battle of the Somme and was killed there in 1917 at just twenty years old.

Buy A Soldier, A Dog and A Boy by Libby Hathorn from Australia's Online Independent Bookstore, Boomerang Books.

Book Reviews - A Soldier, A Dog and A Boy by Libby Hathorn

» Have you read this book? We'd like to know what you think about it - write a review about A Soldier, A Dog and A Boy book by Libby Hathorn and you'll earn 50c in Boomerang Bucks loyalty dollars (you must be a Boomerang Books Account Holder - it's free to sign up and there are great benefits!)

Libby Hathorn (Author) Libby Hathorn is an award-winning author and poet of more than fifty books for children, young adults, and adult readers. Translated into several languages and adapted for both stage and screen, her work has won honours in Australia, the United States, Great Britain and Holland. In 2014 she won The Alice Award, a national award given to 'a woman who has made a distinguished and long term contribution to Australian literature.' Her first young adult novel THUNDERWITH has enjoyed over twenty-five years in continuous print and was made into a Hallmark Hall of Fame movie. Two of Libby's picture books, GRANDMA'S SHOES and SKY SASH SO BLUE, have been performed as operas, with a third on the way. Libby is a keen educator who has lectured part-time at Sydney University and is devoted to being an ambassador for poetry anywhere and everywhere. In 2012 she was a National Ambassador for Reading and travelled to many country towns to talk about Australian literature. For more information, free writing tips and teaching resources, go to www.libbyhathorn.com Phil Lesnie (Illustrator) Phil Lesnie was born in 1985, the same year The Goonies was released. Shortly after the release of The Goonies, he began working in bookshops, and is still working in one now. In Year 6, he learned that some people make a living by drawing X-Men, and he has pursued this sort of living in some form ever since. He currently lives in Sydney with his lovely great big horrible black cat. He is the illustrator of ONCE A SHEPHERD (written by Glenda Millard), which was named Notable Book by the CBCA, shortlisted for the Speech Pathology Australia Book of the Year and listed on the United States Board on Books for Young Outstanding International Books list. phillesnie.tumblr.com