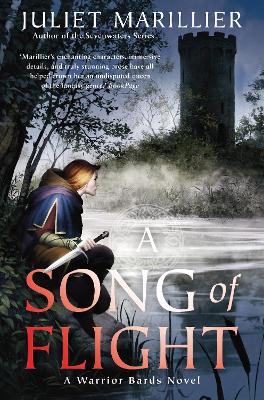 A Song of Flight: A Warrior Bards Novel 3

Description - A Song of Flight: A Warrior Bards Novel 3 by Juliet Marillier

Two warriors. One wields the power of music, one the strength of her sword. Both face a grave threat in this enthralling historical fantasy.

After a violent encounter with masked men and the sinister Crow Folk, Prince Aolu of Dalriada disappears without a trace, and his companion Galen is seriously injured.

Liobhan and the Swan Island warriors seek answers to the prince's abduction. For Liobhan this mission is personal, as Galen is her beloved brother.

While she and her team investigate, Liobhan's younger brother Brocc is in serious trouble. Brocc's secret attempt to communicate with the Crow Folk triggers a shocking incident, and sends him on a path which endangers the one he loves above all else.

What brought the Crow Folk to Erin? And who plots to use them in an unscrupulous bid for power? As Liobhan and Brocc seek the truth, it becomes clear the two missions are connected - and an extraordinary mystery unfolds.

Praise for the Warrior Bard Series:
'Marillier's enchanting characters, immersive details, and truly stunning prose have all helped crown her an undisputed queen of the fantasy genre.' - BookPage

'Her world building is subtle, effortless and the tension well paced throughout the book . . . if you are new to the fantasy genre, a Juliet Marillier fantasy novel is a great place to start.' - Good Weekend

Book Reviews - A Song of Flight: A Warrior Bards Novel 3 by Juliet Marillier

» Have you read this book? We'd like to know what you think about it - write a review about A Song of Flight: A Warrior Bards Novel 3 book by Juliet Marillier and you'll earn 50c in Boomerang Bucks loyalty dollars (you must be a Boomerang Books Account Holder - it's free to sign up and there are great benefits!)


A Preview for this title is currently not available.
More Books By Juliet Marillier
View All