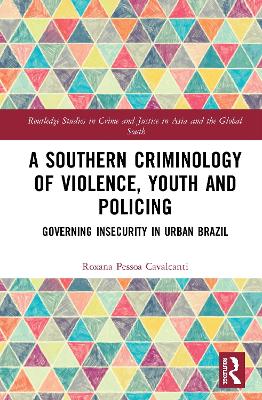 A Southern Criminology of Violence, Youth and Policing: Governing Insecurity in Urban Brazil

A Southern Criminology of Violence, Youth and Policing examines public experiences of insecurity and the social impacts of security programmes that aim to address violence in Brazil. This book contributes to the emerging field of southern criminology by engaging with the perils faced by people living in 'favelas' in Brazil and critically investigating the discourse of state actors. It combines original ethnographic data with critical analysis to expand understandings of violence and control in urban and postcolonial contexts.

This study challenges dominant practices and notions of security and control. Its objective is to decolonise knowledge and shed light on issues relating to policing, coercion, and the great socioeconomic, historical and spatial inequalities that shape the lives of millions of people in the Global South. The findings of this book expose the exacerbation of social problems by the expansion of the penal and crime industry, unsettling the applicability and universalism of mainstream managerial criminology.

The evidence reveals that new modes of securitisation have not addressed long-standing issues of sexism, racism, classism and brutalisation in the police. Moreover, through the increasing use of methods of control and incarceration, security programmes have failed to prevent diverse forms of violence and challenge the expansion of organised crime. Instead they have exacerbated the inequalities that affect the most marginalised populations.

Written in a clear and direct style, this book will appeal to students and scholars in criminology, sociology, cultural studies, social theory and those interested in learning about the social injustices that exists in the Global South.

» Have you read this book? We'd like to know what you think about it - write a review about A Southern Criminology of Violence, Youth and Policing: Governing Insecurity in Urban Brazil book by Roxana Pessoa Cavalcanti and you'll earn 50c in Boomerang Bucks loyalty dollars (you must be a Boomerang Books Account Holder - it's free to sign up and there are great benefits!)