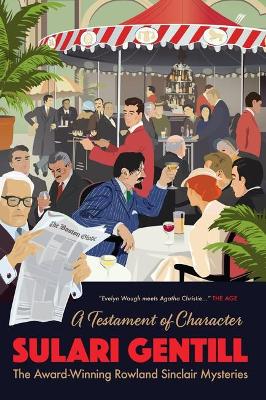 A Testament of Character

Description - A Testament of Character by Sulari Gentill

A suspicious death; A missing person; A journey across America in search of answers. When his friend Daniel Cartwright dies and names Rowland as his executor, Rowland must divert his plans to return home to Australia from Shanghai and travel to America. Daniel was vastly wealthy but appears to have disinherited his family in favour of a man called James Meredith, whom no one can find. In the aftermath of Daniel's death, the Cartwrights challenge Daniel's will, alleging that he was not of sound mind. After Rowland and his troupe of friends take suites at the Copley Plaza in Boston, they then embark on a journey that takes them through New York, Warwick and Baltimore as they track down answers to the questions that surround Daniel's death and the mysterious disappearance of James Meredith.

Other Editions - A Testament of Character by Sulari Gentill 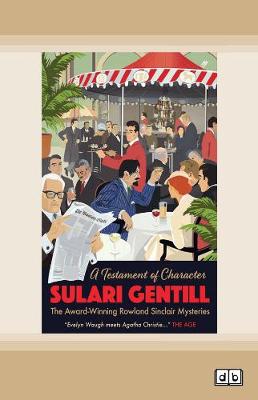 Book Reviews - A Testament of Character by Sulari Gentill

» Have you read this book? We'd like to know what you think about it - write a review about A Testament of Character book by Sulari Gentill and you'll earn 50c in Boomerang Bucks loyalty dollars (you must be a Boomerang Books Account Holder - it's free to sign up and there are great benefits!)

Book Review: A Testament of Character by Sulari Gentill - Reviewed by CloggieA (23 May 2021)

5 stars A Testament of Character is the tenth book in the Rowland Sinclair series by award-winning Australian author, Sulari Gentill. Rowland Sinclair’s shock at the sudden death of his long-time friend, Daniel Cartwright is eclipsed only by his puzzlement at the news that Danny had named him executor of his will. It’s a duty that Rowly is more than willing to perform for his dear friend, but before long, he realises that Danny has saddled him with a dangerous responsibility.

Of course, his close friends, Edna Higgins, Milton Isaacs and Clyde Watson-Jones refuse to allow him to travel to America without their loyal support, so some two weeks later, the party of four is met in Boston by Danny’s lawyers, conveyed to the opulent Copley Plaza Hotel and suitably outfitted for a Massachusetts autumn funeral.

Rowly is forewarned by lawyer, Oliver Burr that the Cartwright siblings are unlikely to accept the terms of their brother’s will and is disturbed to learn that his friend was murdered. Nor has the major beneficiary, Otis Norcross been located. His brothers want Danny declared insane so the will is invalid; his sister, Molly Cartwright, claims that Otis Norcross must have murdered her brother.

In their quest to carry out Danny’s last wishes, Rowly and his friends acquire a Cadillac Madame X and travel to New York and Boston and into North Carolina; they discover that there is more than one Otis Norcross, and more than one Rowland Sinclair; there are parties and dancing and galleries; and there are threats, both subtle and more direct; assaults with fists, guns, knives, arrows and brass knuckles; and abductions; soon enough, Danny’s paranoia about whom he could trust appears to be vindicated;

Where today a victim of a mugging might produce a photo of the assailants on a mobile phone, in 1935 a talented portrait artist like Rowland Sinclair furnishes a quick, accurate sketch that police can recognise.

A certain (married) movie-maker learns that Miss Edna Higgins cannot be had, not for flowers, not for expensive jewellery, not for expansive promises, unless she so chooses; Clyde accidentally acquires a dog he later has cause to regret; the Australians encounter homophobia taken to extremes; one of their party gets married; and there’s finally a certain moment that avid fans have been anticipating for nine books. This is another excellent dose of Australian historical crime fiction and more will be eagerly awaited!

How To: Absurd Scientific Advice for Common Real-World Problems from Randall Munroe of xkcd
Randall Munroe
$18.39 $22.99
More Books By Sulari Gentill
View All