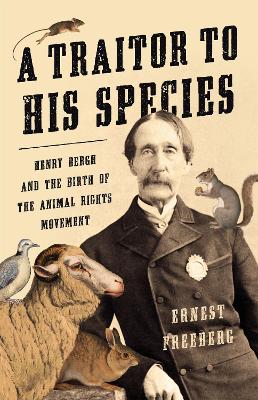 A Traitor to His Species: Henry Bergh and the Birth of the Animal Rights Movement

Description - A Traitor to His Species: Henry Bergh and the Birth of the Animal Rights Movement by Ernest Freeberg

Gilded Age Americans lived cheek-by-jowl with free range animals. Cities and towns teemed with milk cows in dark tenement alleys, pigs rooting through garbage in the streets, geese and chickens harried by the packs of stray dogs that roamed the 19th century city. For all of American history, animals had been a ubiquitous and seemingly inevitable part of urban life, essential to sustaining a dense human population. As that population became ever-denser, though, city dwellers were forced to consider new ways to share space with their fellow creatures-and began to fit urban animals into one of two categories: the pets they loved or the pests they exterminated.Into the fracas of the urban landscape stepped Henry Bergh, who launched a then-shocking campaign to bring rights to animals. Bergh's movement was considered wildly radical for suggesting that animals might feel pain, that they might have rights. He and his cadre of activists put abusers on trial, sometimes literally calling the animal victims as witnesses in court. But despite all the showmanship, at its core the movement was guided by a fierce sense of its devotees' morality. A Traitor to His Species is a revelatory social history, bursting with colorful characters. In addition to the eccentric and droopily-mustachioed Bergh, the movement and its adversaries included former Five Points gang-leader-turned-sports-hall-entrepreneur Kit Burns and his prize bulldog Belcher, larger-than-life impresario P.T. Barnum, and pioneering Philadelphia activist Caroline Earle White. There are greedy robber barons and humanitarian visionaries-all bumping up against one another as the city underwent a monumental shift. For better or worse, they all forged our modern relationship to animals.

Buy A Traitor to His Species: Henry Bergh and the Birth of the Animal Rights Movement by Ernest Freeberg from Australia's Online Independent Bookstore, Boomerang Books.

Book Reviews - A Traitor to His Species: Henry Bergh and the Birth of the Animal Rights Movement by Ernest Freeberg

» Have you read this book? We'd like to know what you think about it - write a review about A Traitor to His Species: Henry Bergh and the Birth of the Animal Rights Movement book by Ernest Freeberg and you'll earn 50c in Boomerang Bucks loyalty dollars (you must be a Boomerang Books Account Holder - it's free to sign up and there are great benefits!)


A Preview for this title is currently not available.
More Books By Ernest Freeberg
View All