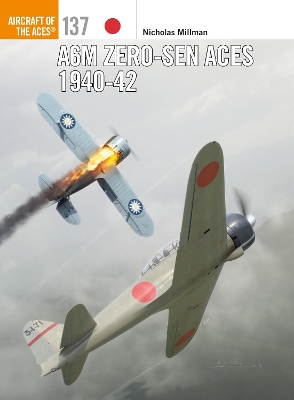 The Mitsubishi A6M Zero-sen was Japan's Spitfire. In continuous development and operational service from the time of the Sino-Japanese war in 1940 to the end of the Pacific War in 1945, it is held in almost mythical awe, similar to Britain's legendary fighter aircraft.

At the time of its operational debut the fighter's design features offered the revolutionary combination of an all-round vision canopy, cannon armament and a jettisonable drop tank giving it phenomenal range. Together with the flying and tactical proficiency of superbly trained pilots, this made the Zero-sen a true strategic fighter, spearheading Japan's offensive in the Pacific. It was also the mount of a plethora of successful and flamboyant naval aces engaged in both sea and land campaigns.

This volume covers the use of the A6M2 variant from its debut in China to the Solomons Campaign, and also tells the story of the A6M2-N "Rufe" floatplane fighter aces.

» Have you read this book? We'd like to know what you think about it - write a review about A6M Zero-sen Aces 1940-43 book by Nicholas Millman and you'll earn 50c in Boomerang Bucks loyalty dollars (you must be a Boomerang Books Account Holder - it's free to sign up and there are great benefits!)

Nicholas Millman is one of Britain's leading researchers of Japanese military aviation. He is the author of three previous Aircraft of the Aces titles for Osprey, and in addition to publishing articles in specialist journals and supporting the research of other authors, he runs his own website dedicated to the subject which attracts visitors from 195 countries. He is a member of Pacific Air War History Associates, an international group of authors and researchers working in this field. Having spent much of his working life in the Far East, he has an abiding interest in the history of military aviation in that part of the world, and first-hand knowledge of the geography, languages and people. He lives in Bury St Edmonds. Ronnie Olsthoorn was born and raised in the Netherlands, where he studied aeronautical engineering. After graduating he chose to become a professional artist and soon moved to the UK. Currently a freelancer, Ronnie has created artwork for 15 computer games and even more aviation books. His work has also appeared in forensic air crash visualisations and numerous aviation and digital arts magazines. He lives in Voorschoten, Netherlands.